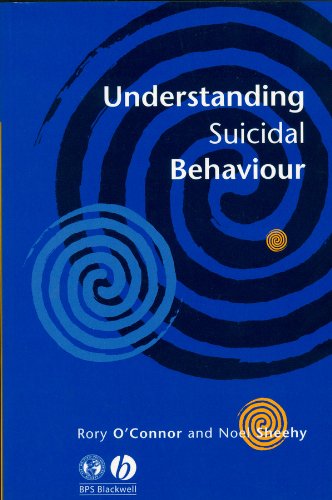 Beginning with a short history outlining different societies' attitudes to suicide, the book continues with a discussion of the difficulties of definition and measurement. The book includes a chapter on suicide letters and discusses whether they are a useful tool for understanding suicide. Finally, the book considers practical aspects and issues such as assisted suicide and suicide prevention.

The traditional view of suicide as profoundly unusual is challenged by the fact that suicide and attempted suicide are the largest causes of death an injury to young adults. Understanding Suicidal Behaviour aims to de-mystify suicide, and shows how regarding it as the product of an insane mind fails to explain why people kill themselves and how those considering suicide may be helped. Written in a jargon-free style and from a theoretically eclectic position the book examines the social and intellectual origins of the view that suicide is profoundly abnormal and a case for medical treatment.


The authors investigate the incidence and causes of suicide, review the risk factors, and examine the implications for prevention and the ethics of intervening-or failing to- intervene-in the context of the needs and rights of those who consider suicide. Through an analysis of suicide letters and conversations with those who have recently attempted suicide, they show how an understanding of suicidal communication can enlighten our thinking.

Understanding Suicidal Behaviour will be a useful guide for those with a general interest in suicidal behaviour as well as psychologist and other health care professionals active in the field, in particular mental health professionals, medical practitioners, social and community workers and physiatrist. It will also be useful for prison officer, voluntary groups psychotherapists and counselors.

Dr. Rory O’ Connor is a lecturer in the Centre for Applied Social Psychology, Department of Psychology at the University of Strathclyde and has written and spoken widely on the subject of suicide.

Professor Noel Sheehy is head of research in the School of Psychology at the Queens University, Belfast, and is editor-in-chief of current psychological, associate editor of the British Journal of Psychological and series co-editor of International Library of Critical Writings in Psychology.

Book Description Blackwell, 2002. Condition: Fair. This is an ex-library book and may have the usual library/used-book markings inside.This book has soft covers. In fair condition, suitable as a study copy. Seller Inventory # 7773529

Book Description Paperback. Condition: Very Good. The book has been read, but is in excellent condition. Pages are intact and not marred by notes or highlighting. The spine remains undamaged. Seller Inventory # GOR003109419

Book Description Wiley-Blackwell, 2000. Condition: Good. 1st Edition. Ships from the UK. Former Library book. Shows some signs of wear, and may have some markings on the inside. Seller Inventory # GRP71637493