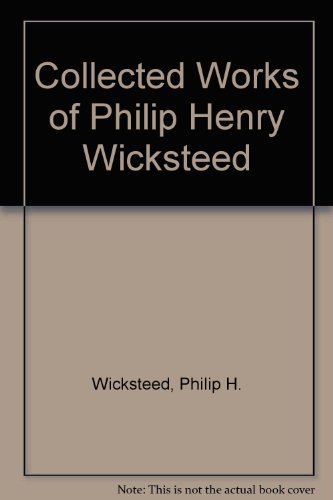 'These new editions of the collected works of leading British economists are most welcome. They will make available many writings of the greatest interest and importance which have all been too rare or inaccessible, and which all good libraries, not to mention individual scholars, need to have on their shelves'
-Terence Hutchison

'The collection of the main economic works of 'the purist of marginal theory', as Sraffa called him, is to be recommended to all historians of economic thought and to economic theorists interested in the contribution of one of the main precursors of modern microeconomic theory.'

Philip Henry Wicksteed (1844-1927) is remembered by many as a leading Dante scholar, but his synthesis of studies of Comte, Jevons, Aquinas, Aristotle, Ibsen, and many others, all came to bear on his writings in economics. It is difficult to grasp the significance of Wicksteed's works in economics unless one sees that for him there was in the end no distinction between 'economic' aspects of human life and 'other' aspects. Wicksteed tried to get economists to take a broad view of their subject, bringing to economics humanitarian feelings, a critical eye, and the common sense of his tradition.

Wicksteed published only three economics books, but contributed a number of important other papers and essays. The most important are probably his critique of Das Kapital, his article on Jevons's Theory of Political Economy, his various contributions to Palgrave's Dictionary of Political Economy, and his paper 'Scope and Method of Political Economy'. These and other essays, along with his book reviews, are contained here in the important two-volume Robbins edition of his magnum opus, The Common Sense of Political Economy ('my life effort to do something real for thought and life'). In addition the very scarce Getting and Spending. Papers on the Meaning and Uses of Money (1897) is included, a work unavailable to most Wicksteed scholars and libraries.

Ian Steedman, a leading historian of economics and Wicksteed authority has selected the texts and written a new introduction. Combined with Robbins's introduction to the long unavailable Common Sense, and Herford's important critical biography, this important collection will give scholars a chance to re-evaluate and study an unjustly neglected English economist of the late nineteenth and early twentieth century.

'The volumes reprinted here still have a great deal to teach economists' - Ian Steedman, from his Introduction.

—reprints important economics texts unavailable for a long time
—introduced by Ian Steedman, Wicksteed authority and leading name in the history of economics
—first collected edition of Wicksteed, who is still regarded as an influential economic theorist