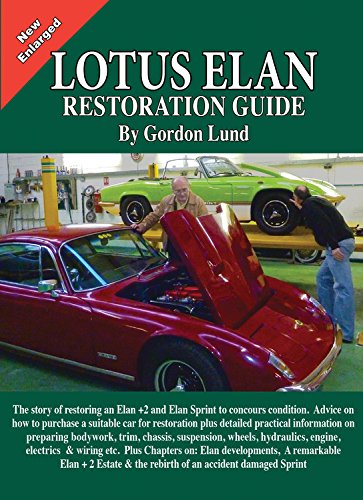 24 chapters plus appendices give information on chassis changing, body restoration, including Elan +2 sills, rebuilding the Lotus/Ford Twin Cam engine, electrics including fitting a new look, insight to runing and running in, Elan developments, a remarkable Elan +2 Estate, rebirth of an accident damaged Spring.

Gordon Lund is of the old school of engineers. He likes to be known as a "Time Served Professional Engineer". Not many of us left he is often heard to say. Leaving school at 16, he started his career as an indentured engineering apprentice in the nuclear industry, learning all the skills and crafts that would stay with him to this day. Studying at Technical College led to a Higher National Diploma in Mechanical Engineering and eventually a Chartered Engineer. A spell of working with Perkins Diesels of Peterborough, England, as a Design Engineer gave him a good grounding in engine technical issues. Gordon eventually went back to his roots in the nuclear industry but still kept a keen interest in all matters automotive. Bringing up a young family, he kept his old cars on the road out of necessity and learnt a lot in the process. Interest in Lotus stemmed from the purchase of a Lotus Elan +2 in 1981, which he still has to this day. His knowledge of living with and keeping this car on the road all these years is well documented in his book and a testament to his fortitude. The purchase of a Lotus Elan Sprint basket case later on and the subsequent rebuild to prize winning concours condition earned him the respect of his peers and is presented in the book as to what is achievable by the home restorer. A contributor to Club Lotus News magazine and Editor of his Club Lotus Regional News Letter, Gordon is an established writer in the Lotus world.