Items related to The British Troops in the Indian Mutiny 1857-59 (Men-At-Arms... 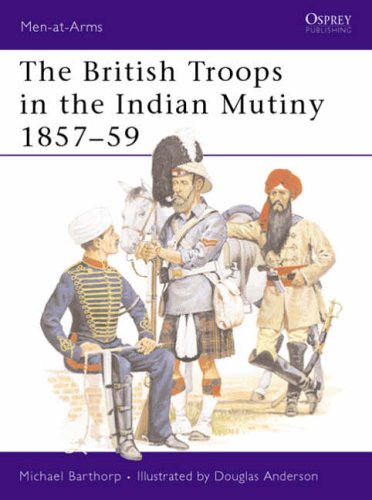 Fourteen months after the Peace of Paris concluded the Crimean War (1853-1856), the British Army was faced with a crisis which would require an even greater commitment of force. Putting down the Indian Mutiny would require two years, over half the British Army, and thousands of East India Company and loyal locals. The EIC’s forces’ better and more experienced command structure and superior rifle-fire prevailed against the massed ranks of sepoys and their allies. The three major operations that were undertaken by the British are detailed, as is the dress, equipment and uniforms of the troops.

Michael Barthorp was educated at Wellington College and was commissioned into the Rifle Brigade in 1946. Demobilised in 1948, he served as a Territorial with The Royal Hampshire Regiment before rejoining the Regular Army in The Northamptonshire Regiment to continue a family tradition, ending his career with the Royal Anglian Regiment in 1968. He has since published numerous books on the British Army history and costume, including nine titles for the Men-at-Arms series. He lives in Jersey, Channel Islands.

Book Description Osprey Publishing, 1994. Paperback. Condition: Good. Connecting readers with great books since 1972. Used books may not include companion materials, some shelf wear, may contain highlighting/notes, may not include cdrom or access codes. Customer service is our top priority!. Seller Inventory # S_271191094

Book Description Osprey Publishing, 1994. Paperback. Condition: Good. Item may show signs of shelf wear. Pages may include limited notes and highlighting. May include supplemental or companion materials if applicable. Access codes may or may not work. Connecting readers since 1972. Customer service is our top priority. Seller Inventory # mon0001674826

Book Description Osprey, 1994. Paperback. Condition: VERY GOOD. Pages are intact and are not marred by notes or highlighting, but may contain a neat previous owner name. The spine remains undamaged. Seller Inventory # 1855323699_abe_vg