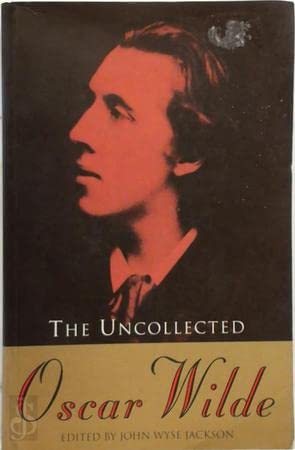 This collection of writings comes from the neglected period of Oscar Wilde's output, before the great plays, when he was contributing for journals and editor of The Woman's World. Read together, these pieces illuminate the author's mode of life and thought, and that of his age.

"Uncollected" is a slight misnomer. Jackson, a British publisher and essayist, has gathered these occasional pieces from The Complete Works of Oscar Wilde (1908): they will be familiar to devoted readers, who have always known that the Divine Oscar did some of his best writing on utterly forgettable subjects. As the book reviews included here show, Wilde perfected the backhanded compliment and no one has done it better since-the slighter his victim the more delicate his touch. If there's a fault in this selection it's that it has too little Women's World (the magazine Wilde briefly edited) and too much lecture circuit. But even if Wilde's American lectures on the Aesthetic Movement have none of the depth of his later philosophical dialogues, they have historical interest and, of course, plenty of wit. It's easy to forget how Modernist Wilde's version of Arts and Crafts could sound, even easier to forget how Utilitarian his early aestheticism was. He is full of practical suggestions for his audience: American boys should decorate the family porches with carvings, workmen should go to museums and everybody should dress like California miners. This is hardly The Soul of Man Under Socialism. Wilde's condescension toward his American listeners shades now and then into pure goofiness-but even at his silliest, Wilde is never dull.

Book Description . Paperback. Condition: Very Good. The book has been read, but is in excellent condition. Pages are intact and not marred by notes or highlighting. The spine remains undamaged. Seller Inventory # GOR005606356

Book Description 4th Estate 1998-01-01, 1998. Paperback. Condition: Very Good. Item is in very good condition. If supplemental codes/CDs for textbooks are required please contact us prior to purchasing as they may be missing. Seller Inventory # DS-185702334X-2

Book Description SAGE Publications Ltd, 1995. Paperback. Condition: Used; Good. **Simply Brit** Shipped with Premium postal service within 24 hours from the UK with impressive delivery time. We have dispatched from our book depository; items of good condition to over ten million satisfied customers worldwide. We are committed to providing you with reliable and efficient service at all times. Seller Inventory # 1850847

Book Description Sage Publications Ltd, 1995. Paperback. Condition: Used; Good. **SHIPPED FROM UK** We believe you will be completely satisfied with our quick and reliable service. All orders are dispatched as swiftly as possible! Buy with confidence!. Seller Inventory # 2218190