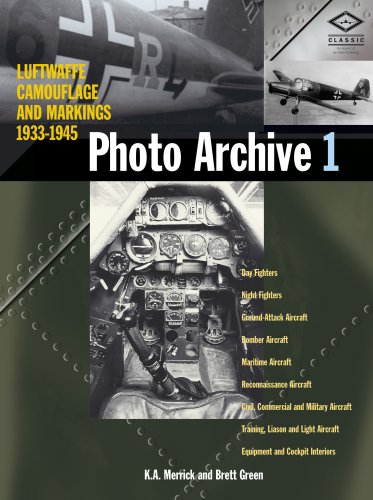 It was recognized from the beginning of the Luftwaffe Camouflage and Markings series that only a fraction of the wealth of photographic material unearthed in the course of the research could be included.
This is the first photographic supplement to the original two volumes. Compiled by Ken Merrick, the author of the original two volumes, and fellow Australian Brett Green, each of these follow-up books will focus on specific aspects of Luftwaffe practice from 1933 to 1945.
The key feature in this book is cockpit detail and instrumentation. Other topics covered by the photos are day fighters, nightfighters, ground-attack aircraft, bombers, maritime and reconnaissance aircraft, and those used primarily in civil and commercial capacities as well for training and liaison.

Ken Merrick has been researching and writing about British and German aviation subjects for the last 40 years, producing books ranging from the history of individual aircraft types, to a highly detailed history of Allied clandestine air operations in World War II. He became particularly interested in the subject of German camouflage systems 30 years ago and has since written a number of highly acclaimed books on the subject in the intervening years.

As a historian and enthusiast, Eddie J. Creek has been actively collecting documents and photographs relative to the history of the Luftwaffe for over 30 years.