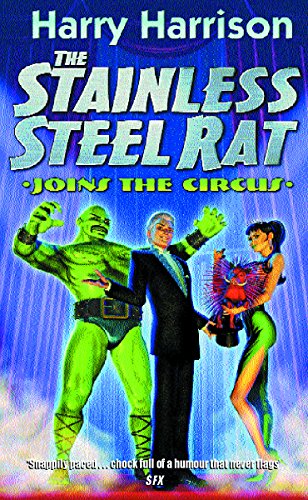 When you are the richest man in the Universe and someone is robbing your banks you can afford the best the in the business to catch the criminals responsible; even if he’s charging 4 million a day plus expenses. And so Slippery Jim DiGriz finds himself on a bizarre undercover mission in a circus.

Harry Harrison is one of the established greats of SF The Stainless Steel Rat is his most popular creation ‘The Rat can hold his head up high amongst the most elevated superhero company; Bulldog Drummond, James Bond and Flash Gordon’ TIMES LITERARY SUPPLEMENT

Book Description Orion Pub Co, 2001. Condition: Good. A+ Customer service! Satisfaction Guaranteed! Book is in Used-Good condition. Pages and cover are clean and intact. Used items may not include supplementary materials such as CDs or access codes. May show signs of minor shelf wear and contain limited notes and highlighting. Seller Inventory # 1857987241-2-4

Book Description Gollancz, 2001. Paperback. Condition: Used; Good. Page colour - ?discoloured in accordance with book age. **Simply Brit** Shipped with Premium postal service within 24 hours from the UK with impressive delivery time. We have dispatched from our book depository; items of good condition to over ten million satisfied customers worldwide. We are committed to providing you with reliable and efficient service at all times. Seller Inventory # 2868474

Book Description Gollancz. Paperback. Condition: Very Good. Item is in very good condition. If supplemental codes/CDs for textbooks are required please contact us prior to purchasing as they may be missing. Seller Inventory # DS-1857987241-2

Book Description -. Paperback. Condition: Very Good. The Stainless Steel Rat Joins The Circus: The Stainless Steel Rat Book 10 (GOLLANCZ S.F.) This book is in very good condition and will be shipped within 24 hours of ordering. The cover may have some limited signs of wear but the pages are clean, intact and the spine remains undamaged. This book has clearly been well maintained and looked after thus far. Money back guarantee if you are not satisfied. See all our books here, order more than 1 book and get discounted shipping. Seller Inventory # 7719-9781857987249

Book Description Gollancz 11/10/2001, 2001. Condition: Very Good. Shipped within 24 hours from our UK warehouse. Clean, undamaged book with no damage to pages and minimal wear to the cover. Spine still tight, in very good condition. Remember if you are not happy, you are covered by our 100% money back guarantee. Seller Inventory # 6545-9781857987249

Book Description Paperback. Condition: Very Good. The book has been read, but is in excellent condition. Pages are intact and not marred by notes or highlighting. The spine remains undamaged. Seller Inventory # GOR001546367

Book Description Paperback. Condition: Good. The book has been read but remains in clean condition. All pages are intact and the cover is intact. Some minor wear to the spine. Seller Inventory # GOR002184914