Items related to The Key to Medicine and a Guide for Students: Miftah...

The Key to Medicine and a Guide for Students: Miftah al-tibb wa-minhaj al-tullab (Great Books of Islamic Civilization) 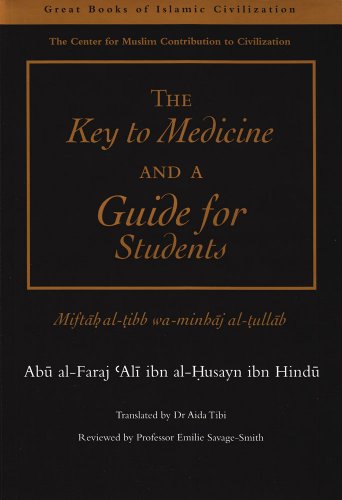 This book - now available in paperback - was originally written in the early 11th century by Abu al-Faraj 'Ali ibn al-Husayn ibn Hindu (d. 423/1032), a physician who was also the author of a treatise on philosophy, and who was famous for his Arabic poetry (his anthology is said to have amounted to 15,000 couplets or more). For a medieval work, which was written as an introduction to medicine intended for students, the book is refreshingly meticulous in its analysis and is modern in its outlook. It discusses the various disciplines that a medical student should have been familiar with, including a lengthy digression into philosophy and logic. It then deals with matters specifically medical, devoting separate sections to anatomy, diseases, pulse, and names of medicinal substances.

Aida Tibi was born in Tulkarm, Palestine and studied in Beirut before earning a BA (Hons) in Classical Arabic at the University of London (1968), a MA in Classical Arabic in 1970 from the same institution, and a DPhil in Oriental Studies from the University of Oxford (1975). Her doctoral thesis focussed on a 12th-century manuscript about famous women in early Islam, with the Arabic text published by al-Dar al-'arabiyya li'l-kitab (Libya/Tunisia) in 1978 under the title al-Hada'iq al-Ghanna' fi akhbar al-nisa'. She served as Lecturer in Arabic and Islamic History at the University of Tripoli, Libya, and is now living in Oxford with her husband, Dr Amin Tibi.

1. The Key to Medicine and a Guide for Students: Miftah al-tibb wa-minhaj al-tullab (Great Books of Islamic Civilization)