Items related to In Light of India

Paz, Octavio In Light of India

In Light of India 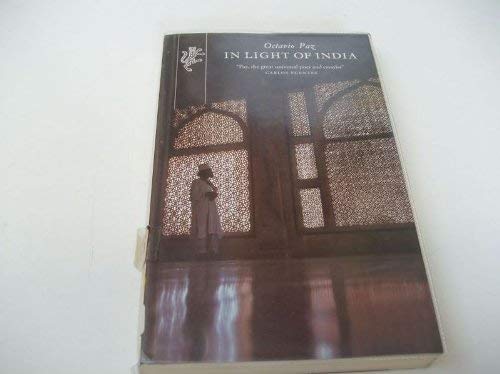 This collection of essays recalls the author's days in India, first as an attache in the Mexican Embassy, then 11 years later as Mexico's ambassador. He brings insight into India's landscape, culture and history in a series of discourses. "The Antipodes of Coming and Going" is a remembrance of the sights, sounds and smells of the subcontinent. "Religions, Castes, Languages" gives a survey of Indian history". "A Project of Nationhood" is an examination of modern Indian politics, comparing the respective Islamic, Hindu and Western civilizations through the course of history. "The Full and the Empty" is an exploration into what Paz calls the soul of India, its art, literature, music and philosophy, and an indictment of the self-centred materialism of Western society. Octavio Paz is the author of "The Double Flame: Essays in Love and Eroticism".

Uncertainty stalks Octavio Paz. In Light of India is Paz's return to issues addressed in his poems of India that were inspired by his residence there three decades earlier. The paradoxes of a troubled nation are persistent, and Paz revisits the unfathomable facets of India with an eye on his Mexican homeland. Beneath the sensuous veneer of modern India lies a complex lattice of religious tendrils that reach into and influence Indian history, society, literature, and art. Paz follows these tendrils as well as anyone can, piecing together a nation of beauty, profundity, and enigma. Profundity aside, if Paz were writing about dust particles, he'd be worth reading.

Octavio Paz was born in 1914 and died in 1998. The author of eighteen books, he was awarded the Nobel Prize for Literature in 1990.

1. In Light of India