Items related to The Banzai Hunters: The Forgotten Armada of Little... 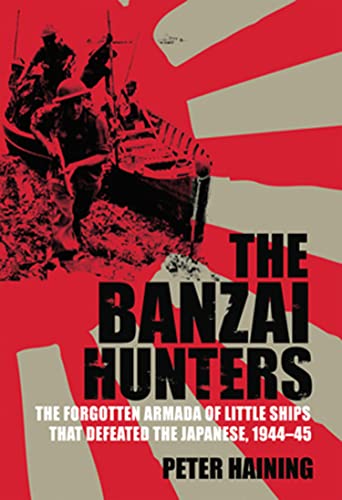 The story of the 'Forgotten Army' – the British 14th, commanded by the brilliant but unorthodox General WJ 'Bill' Slim that took on the Japanese entrenched in Burma in 1944 – has been recorded. But Slim's bloody and fraught victory on the mainland would not have been possible without the springboard provided by a remarkable assortment of army and navy men in small boats, landing craft and even frogman suits who stole along the rivers and onto the islands along the eastern coast of Burma to open the way for a turning point as vital al El Alamein in the Western Desert or D-Day on the Normandy beaches.The missions that these men carried out were often as colourfully named as their own names; 'Operation Drakula', 'The Chung War', Operations 'Turret' and 'Screwdriver', and in this thoroughly researched and accessible analysis, Peter Haining details the Japanese response to these insidious assaults. He tells how Lietenant-General Sakurai instituted his own missions in which his men were told to show no mercy and take no prisoners.Battling against the hated Japanese, as well as some of the deadliest insects, animals and diseases known to man, in the thick, dense jungle of the Arakan, units of the Royal Marines and Royal Navy were helped by a motley collection of roving seamen in what makes for a story of heroism, extreme danger and occasional unforced errors. The book is largely based on personal stories by the men who served, and also draws on documents and information from naval and army records.