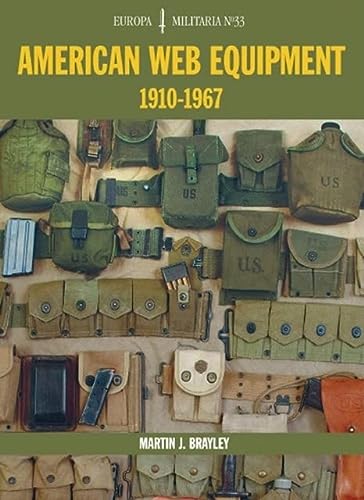 In this book, a follow-up to the same author's well-received study of British web equipment, Martin Brayley gives a detailed illustrated overview of the webbing straps, holsters, carriers and haversacks used by American combat troops from before World War One to the Vietnam War. Hundreds of different items are photographed, and the often small differences between suppliers and periods are pointed in the learned and informative text. This book will be required reading for all students of American uniform and equipment, modelers, re-enactors and collectors.

Martin J Brayley is a professional photographer and author, specializing in works on uniforms and militaria.  He served in the armed forces for 24 years, and has a keen interest in all aspects of military history, particularly the uniforms and equipment of the 20th century.  He is also a dedicated military researcher and collector and a regular contributor to the French magazine Militaria.  He had had many books published by Crowood including The World War II Tommy - British Army Uniforms, Europe 1939-45 and Khaki Drill and Jungle Green - British Tropical Uniforms 1939-45.

Shipping: US$ 5.06
From United Kingdom to U.S.A.
Destination, rates & speeds