Items related to The secret language of birthdays: personology profiles...

Gary Goldschneider;Joost Elffers The secret language of birthdays: personology profiles for each day of the year

The secret language of birthdays: personology profiles for each day of the year 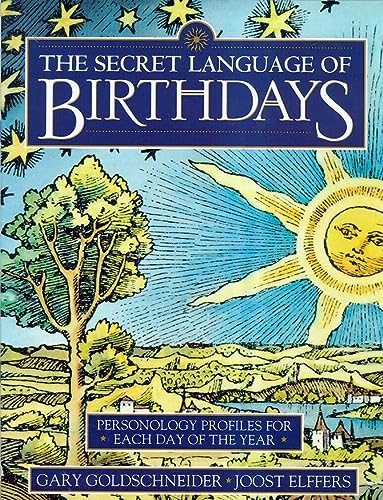 Personology profiles for each day of the week.

Sure, it's neat to know which famous people have the same birthday you do, but wouldn't it be fascinating to know what else you have in common with these celebrities? The Secret Language of Birthdays will show you this and much more. Through "personology" (a combination of characteristics influenced by sun sign, season, and day of the year) and an analysis of several thousand character profiles, authors Gary Goldschneider and Joost Elfers have pinned down the traits most common to people born on the same day.

Rather than taking a strictly astrological approach--how the planets, sun, and stars affect a person's behavior--the authors compare the commonalties of people who share birthdays, and piece together a personality for each day of the year, effectively slicing through geographical and cultural differences, while avoiding the one-size-fits-all trap of newspaper sun-sign horoscopes. Some readers may find the authors' strict use of the Gregorian calendar limiting, but conversion to other time-keeping systems is fairly simple (the authors make note of this problem and contend that a day is a day, whether someone names it October 21 or 1 Rajab). Goldschneider and Elfers focus on a model of the year as a wheel spinning in a recurring circle of patterns, an idea that reaches back far beyond the linear calendars we use today. Each birthday discussed includes important numbers, tarot cards, and a dose of psychology, so while you learn a little about the other people with your birthday, you may even discover something new about yourself. --Brian Patterson

Gary Goldschneider began his study of human personality with an interest in biographies and psychoanalytic theory. Before deciding against a career in medicine, for three years he attended Yale Medical School, where he studied psychiatry. During this time he discovered his deep and abiding interest in astrology and its symbolic relationship to personality.

Joost Elffers was born in Amsterdam. He created and produced numerous books over the past twenty years, including Play With Your Food and The 48 Laws of Power. He lives in New York.

1. The secret language of birthdays: personology profiles for each day of the year