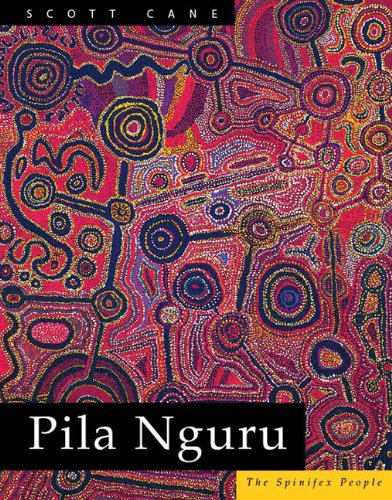 The People of the Sun and Shadow, the Spinifex People, were cocooned within the Spinifex plains of the Western Desert for hundreds of generations until shaken from their nomadic solitude by the atomic shock of Maralinga. When they returned to their homelands in the 1980s, after their displacement, they found the southern third of their country had been converted into a nature reserve, the northern third leased to Aboriginal people in the north and the center deemed vacant crown land. This is a detailed account, in words and artworks, of the culture and history of the Spinifex People, an almost invisible people in modern Australia.

Scott Cane works as a consultant and is the coauthor of Land Use and Resources in Desert Homelands. He has written more than 90 reports and 25 published papers about Aboriginal cultural heritage, community life, and relations to land.

"Pila Nguru is a detailed account, in words and artworks, of the culture and history of the Spinifex People."  —heritage-key.com

Book Description Fremantle Press, 2002. Condition: Good. A+ Customer service! Satisfaction Guaranteed! Book is in Used-Good condition. Pages and cover are clean and intact. Used items may not include supplementary materials such as CDs or access codes. May show signs of minor shelf wear and contain limited notes and highlighting. Seller Inventory # 1863683488-2-4