Items related to Chronicles of Dissent 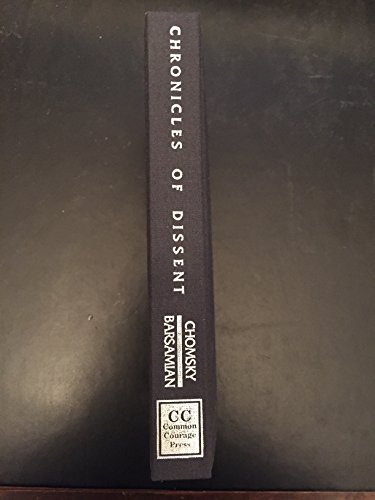 Chomsky feels the abuses, cruelty and hypocrisies of power more intensely than anyone I know. It's a state of continual alertness. Often, after I've glanced at a story in the paper and skipped rapidly over the familiar rubble of falsification, a week or two later will drop into my mailbox a photocopy of that same story marked up by Chomsky, with sentences underlined and a phrase or two in the margin etched deep into the paper by an angry pen.

What Chomsky offers is a coherent "big picture," buttressed by the data of a thousand smaller pictures and discrete theaters of conflict, struggle and oppression.... For hundreds of thousands of people--over the years, he must have spoken to more American students than any person alive--Chomsky has offered the assurance, the intellectual and moral authority, that there is another way of looking at things. In this vital function he stands in the same relationship to his audience as did a philosopher he admires greatly, Bertrand Russell.

-Alexander Cockburn, from his introduction "Excavating the Truth"

Noam Chomsky is Institute Professor of Linguistics at the Massachusetts Institute of Technology, and is the author of many books on U.S. foreign policy.

Book Description Common Courage Press, 1992. Condition: Good. Former Library book. Shows some signs of wear, and may have some markings on the inside. Seller Inventory # GRP117574631

Book Description Common Courage Press, 1992. Condition: Good. A+ Customer service! Satisfaction Guaranteed! Book is in Used-Good condition. Pages and cover are clean and intact. Used items may not include supplementary materials such as CDs or access codes. May show signs of minor shelf wear and contain limited notes and highlighting. Seller Inventory # 1873176902-2-4