Items related to Signs for a Messiah: The First and Last Evidence for...

McCleary, Rollan Signs for a Messiah: The First and Last Evidence for Jesus

Signs for a Messiah: The First and Last Evidence for Jesus 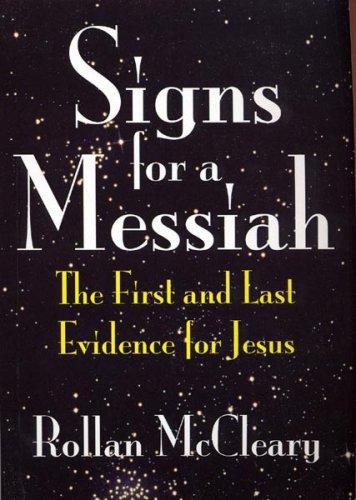 Was Jesus a dissident Essene, a Magician, a Cynic teacher? Did he die on the cross, as many believe, or did he marry the Magdalene and die in France or India? Many of the modern quests for the truth about Jesus have resulted in increasing doubt and skepticism about him. Biblical claims that the earthly brother of James was born of a virgin and was the promised Messiah are now seen by some as only late adaptations of a growing faith. Is new information or any certainty possible here?

Signs for a Messiah suggests that it is. This is a wide ranging study of Jesus but with special emphasis on one form of evidence, the oldest and most recent: the signs the Magi knew but which have eluded scholarly inquiry for two millennia due partly to a hostility from ecclesiastical and scientific establishments only now beginning to weaken. Before the Gospels were written something in the skies was a first witness to Jesus and his destiny. Finally these signs can be known. They are illuminating and with much unexpected modern relevance since even the Magi, who understood the significance of the Bethlehem star and the era that it heralded, lacked the wider, sometimes remarkably precise and revealing picture available today with augmented data.

As this unique study reveals and explains the enlarged picture includes factors such as astronomy’s newcomers, the asteroids, and the so-called Arabic Parts (mathematically derived sensitive points of a horoscope). These are combined in statistically improbable patterns of significance at the time of Jesus’ birth. Beyond the original pattern for a Messiah it can be seen that at Christ’s nativity the asteroid James suitably conjuncted his "Part" of the Brothers. We also find that the asteroid Eternity conjuncted his "Part" of the Father, that the asteroids Maria and (the virgin associated) Vesta made conjunction in aspect to his "Part" of the Mother while the asteroid Magdalena stood in tense opposition to his "Part" of Marriage. But even these historically and theologically suggestive indications comprise only a small element within a dynamic, revealing pattern that worked accurately for Jesus’ life and registers vividly for Christ issues to this day.

The wisdom of the Magi has been found. A door has been opened to an understanding of Jesus that is both clearer and more mysterious than current interpretations. It becomes easier to appreciate who Jesus was and what he was actually like. The Magian knowledge that once troubled "all Jerusalem", retains an unsettling, revolutionary dimension. It might still prove a source for prophecy also.

Rollan McCleary was born in London, England. After graduating in European languages and history from London University he worked in recording and broadcasting in Paris. He then spent over a decade in Asia, traveling widely but living mainly in Hong Kong where he taught.

He also studied South East Asian drama at Fine Arts University, Bangkok. Rollan emigrated to Australia in 1987. A citizen of Australia and Ireland Rollan currently lives in Melbourne. As a writer he has composed poetry and drama, the latter broadcast on the ABC but his main concern has been with religion and philosophy. His The Expansion of God [SCM 1981/Orbis1982] about the indigenization of Christianity in Asia was a critical success.

Rollan is also a qualified astrologer who since the mid eighties has periodically consulted, lectured and written on the subject, especially in The Australian Astrological Monthly Review; but his main interest in the subject, as in the current book, remains research. He has recently obtained a doctorate in religious studies from Queensland University in Brisbane, Australia and has just finished writing a commentary on the Nicene Creed.

1. Signs for a Messiah : The First and Last Evidence for Jesus