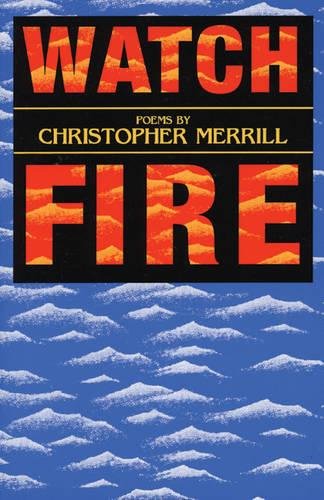 "Christopher Merrill is one of the most gifted, audacious, and accomplished poets of an extraordinarily rich generation..... This collection shows a complex talent developing and extending its original high promise."--W.S. Merwin

Watch Fire is a collection including poems from Christopher Merrill's first two books as well as later poems. It concludes with his exquisite long poem "Luck," which begins "For those not born to wealth or royalty, / Luck's a language learned by fits and starts." Merrill treats the fickleness of fate--and humanity's attempts to define fate--with both poignancy and humor. His imagery enters the mind like a new dialect, not with trite or clichéd metaphors, but startling and uncommon word pictures that heighten the mood as well as the senses, such as in "The Rope": "Your eyes, when you turn away, burn black--before you disappear, / leaving on the sidewalk a trail of charcoal." Merrill's art is for those who love uniqueness in poetry.

Christopher Merrill has published four collections of poetry, including Watch Fire, for which he received the Peter I. B. Lavan Younger Poets Award from the Academy of American Poets; several edited volumes and works in translation; and four books of nonfiction. He directs the International Writing Program at the University of Iowa.