Items related to Don't Go to the Cosmetics Counter Without Me: A...

Begoun, Paula Don't Go to the Cosmetics Counter Without Me: A Unique Guide to Over 30,000 Products, Plus the Latest Skin-Care Research (Completely Revised and Updat

Don't Go to the Cosmetics Counter Without Me: A Unique Guide to Over 30,000 Products, Plus the Latest Skin-Care Research (Completely Revised and Updat 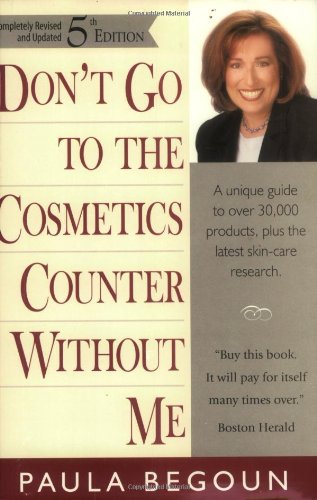 Paula Begoun's mission is to educate women on the facts that the $45 billion cosmetics industry doesn't want people to know. In her makeup and skincare bible, she deciphers ingredient lists, translates cosmetics-counter beauty babble, and evaluates the worth of virtually every product on the market. This completely revised and expanded edition includes more than 75 new product lines. "Her straight talk about what cosmetics can and can't do has penetrated the blare of magazine and advertising hype." - San Francisco Chronicle; "Paula is nationally recognized as an authority on the subject of cosmetics. . . . She takes the cosmetics companies to task." - Miami Herald.

Women spend an extraordinary amount of money on cosmetics--$45 billion a year in the U.S. alone. Now in its fourth edition, Don't Go to the Cosmetics Counter Without Me strikes fear in cosmetics-counter consultants everywhere. First off, Begoun has deconstructed ingredient lists. Ever wonder what methylparaben, propylparaben, and butylparaben are doing in your mascara? And what is diazolidinyl urea? All four are potential irritants, and the latter is a preservative that can release formaldehyde, a class A carcinogen. Buyer beware.

Begoun also lists which companies are cruelty-free and which continue to conduct animal testing. The majority of the book--and that's nearly 800 pages--is devoted to reviews of thousands of cosmetics, from cleansers, foundations, alpha-hydroxy acids, and moisturizers to lip liners, eye shadows, and concealers, all of which Begoun has personally tested. (There are no hair care products listed, as that warrants another book entirely: Don't Go Shopping for Hair Care Products Without Me.)

She's perfectly frank and tells it like it is. (On Revlon's ColorStay Makeup: "goes far beyond the claim of 'It won't come off on him.' It won't come off when you want it to.") You'll learn how to tell when you're being boondoggled by a salesperson, what's overpriced and overhyped, as well as what's overlooked. More than 200 brands are included, along with a helpful summary at the end that lists the best products for each cosmetic category. It should be noted that not only is Begoun a fine consumer advocate, she's also a self-esteem advocate: she mentions time and again that even the best cosmetics won't necessarily improve your life, and that's a point well taken.

Paula Begoun has been reporting on the beauty industry for more than 25 years. Her unique angle on the cosmetics industry has earned her the nickname of "Cosmetics Cop". She is an internationally-recognised authority as a consumer advocate for the beauty industry, and is called on regularly by reporters and producers from television, magazines, and radio. Paula has appeared on hundreds of US talk shows including Oprah, 20/20, Dateline NBC, The View, the Today Show, CBS This Morning, and Good Morning America. Paula Begoun is recognised by women all over the world as the most reliable source for answers to all of their beauty-related questions.

1. Don't Go to the Cosmetics Counter Without Me: A Unique Guide to Over 30,000 Products, Plus the Latest Skin-Care Research (Completely Revised and Updat

2. Don't Go to the Cosmetics Counter Without Me: A Unique Guide to Over 30,000 Products, Plus the Latest Skin-Care Research (Completely Revised and Updat

3. Don't Go to the Cosmetics Counter Without Me: A Unique Guide to Over 30,000 Products, Plus the Latest Skin-Care Research (Completely Revised and Updat Begoun, Paula