Items related to In the Beginning: Compelling Evidence for Creation...

Walt Brown In the Beginning: Compelling Evidence for Creation and the Flood (8th Edition)

In the Beginning: Compelling Evidence for Creation and the Flood (8th Edition) 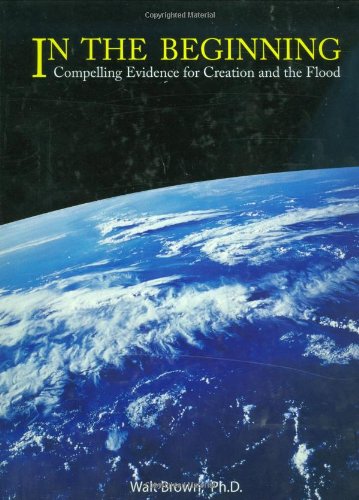 In this expanded 8th edition, evidence that revolutionizes our understanding of origins is carefully explained. Part I discusses, in quick overview, 131 categories of evidence from biology, astronomy, earth science, and the physical sciences. Part II describes the hydroplate theory, developed during 35 years of study and research by Walt Brown. This theory explains a catastrophic event in Earth's history and solves a host of recognized problems. Some chapters in Part II deal with: the origin of the Grand Canyon, evidence that shows comets, asteroids, and meteroids came from Earth. the sudden freezing and burial of the frozen mammoths, if there was a global flood, where the water came from and where it went, and how mountain ranges, volcanoes, submarine canyons, ocean trenches, and coal and oil deposits were formed. Thirty-seven other frequently asked questions fill a fascinating Part III of Brown's book. A few of those questions are: Is global warming occurring? If so, what causes it? Have scientific tools detected genetic traces of Adam and Eve within us? How accurate is radiocarbon dating? What about the dinosaurs? What hydroplate theory predictions have been confirmed? Is evolution compatible with the Bible?

Walt Brown received a PhD in mechanical engineering from Massachusetts Institute of Technology (MIT), where he was a National Science Foundation Fellow. He has taught college courses in physics, mathematics, and computer science. Brown is a retired Air Force full colonel, West Point graduate, and former Army Ranger and paratrooper. Assignments during his 21 years of military service included: Director of Benet Laboratories (a major research, development, and engineering facility), tenured associate professor at the US Air Force Academy, and Chief of Science and Technology Studies at the Air War College. For much of his life Walt Brown was an evolutionist, but after years of study, he became convinced of the scientific validity of creation and a global flood. Since retiring from the military, Brown has been the Director of the Center for Scientific Creation and has worked full time in research, writing, and teaching on origins. His biography is in "Christian Men of Science: Eleven Men Who Changed the World" by Mulfinger and Orozco.

1. In the Beginning: Compelling Evidence for Creation and the Flood (8th Edition)

2. In the Beginning: Compelling Evidence for Creation and the Flood (8th Edition)