Items related to The Pagemaster 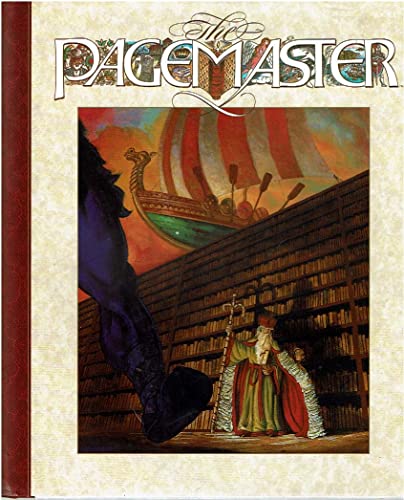 Ten-year-old Richard Tyler discovers a world of adventure at his local library when the books start to come alive and he is surrounded by some of literature's most entertaining characters.

A phobic 10-year-old is trapped in a library of animated literary classics in this earnest, handsomely set out, but uninspired tale from Hanna-Barbera's CEO (creator of ``An American Tail'') and a staff writer. Fleeing a thunderstorm, Richie Tyler comes on a large building guarded by marble lions; inside, ``Mr. Dewey'' hands him a library card and sends him into the shadowy stacks, where he falls in with three stubby-limbed companions- -''Adventure,'' in eyepatch and bandanna, motherly ``Fantasy,'' and purple, self-pitying ``Horror.'' Together, they witness Captain Ahab's climactic encounter with Moby Dick, are held prisoner by Long John Silver, and flee on a magic carpet from a fire-breathing dragon, among other brief encounters. The heavy, coated stock and big, bright illustrations give the book a substantial feel at odds with its contents; the authors capture little of the flavor or spirit of their sources (and have a strange idea of what 10-year- olds want to read). The writing can be bombastic (``Fiction A to Z!...The place where a child's imagination can take root and grow to incredible heights!''), and Richie is a cartoon character at best. Looking for a fictive gateway to good books? Entice readers with Anne Lindbergh's imaginative Travel Far, Pay No Fare (1992). (Fiction. 10-12) -- Copyright ©1993, Kirkus Associates, LP. All rights reserved.

The adventures of the obsessively fearful Richard in this oversize, garishly illustrated allegory begin when he reluctantly ventures out on his bike, even though "most traffic accidents happen within three blocks of the home." In the library, he bumps his head (shades of The Wizard of Oz ) and finds that he must travel across a fantasy landscape teeming with characters from fiction--Moby Dick, Dr. Jekyll, Long John Silver, Thumbelina--to reach the exit. Three personified books--the piratical but cowardly Adventure, schoolmarmish Fantasy (an odd, sexist characterization) and ugly, eager-to-please Horror--accompany him on his pseudo-epic journey. At the end he must confront a dragon (and his fears) on his own. As he pedals home, the change in his personality is both considerable and hard to credit (in one illustration, his glasses have even vanished). Constant references to Richard's timidity and the bickering among his cartoon-like companions are as tiresome as the unimaginative prose: "All this time, the dragon was torching everything around it." Nor does the florid, egregiously literal art add much. Ages 7-13. 150,000 first printing.
Copyright 1993 Reed Business Information, Inc.