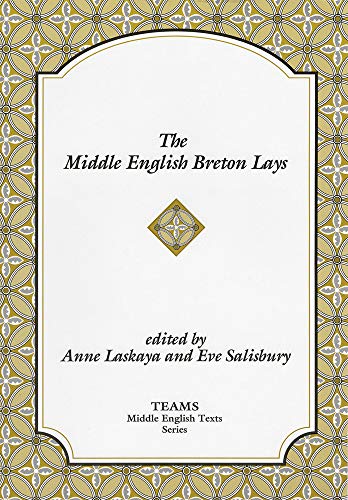 This volume is the first to make the Middle English Breton lays available to teachers and students of the Middle Ages. Breton lays were produced by or after the fashion of Marie de France in the twelfth century and claim to be literary versions of lays sung by ancient Bretons to the accompaniment of the harp. The poems edited in this volume are considered distinctly English Breton lays because of their focus on the family values of late medieval England. With the volume's helpful glosses, notes, introductions, and appendices, the door is opened for students to study Middle English poetry and the medieval family alike.

Anne Laskaya is Associate Professor of English at the University of Oregon. Her publications include also Chaucer's Approach to Gender in The Canterbury Tales, Cambridge, UK: Boydell & Brewer, D.S. Brewer, 1995; The World of Literature, a textbook co-edited with Louise Westling, Stephen Durrant, James Earl, Stephen Kohl, and Steven Shankman, Prentice-Hall, 1999; "The Rhetoric of Incest in the Middle English Emare," 1998; "Wrangling Parliaments: Lesbian Studies and Medieval Studies," in The Lesbian Premodern, ed. Gaffney, et al, 2011. Work in progress: Caxton's Mirror of the World, a scholarly edition under contract with Medieval Institute Publications, Western Michigan University Press; "Ekphrasis and Orientalism in the Middle English Emare." Eve Salisbury is Professor of English at Western Michigan University where she teaches the works of late medieval poets-Dante, Boccaccio, Chaucer, Gower, Christine de Pizan, and Marie de France-Middle English and Arthurian literature, Medieval Literary Theory, British Literature I, and Medieval Drama. She has also taught a graduate seminar on medieval marriage at the Newberry Library in Chicago. Her publications include three volumes for the Middle English Text Series-The Trials and Joys of Marriage, Four Romances of England, and The Middle English Breton Lays-an edited collection, Domestic Violence in Medieval Texts, in which her essay on Chaucer's 'wife' and the law appears, and essays in journals such as Medieval and Early Modern English Studies, Studies in the Age of Chaucer, a monograph series (Speculum Sermonis), and special collections on medieval violence. She has written book reviews for Speculum and reviewed submissions for PMLA, The Journal of English and Germanic Philology, Chaucer Review, and Brepols.