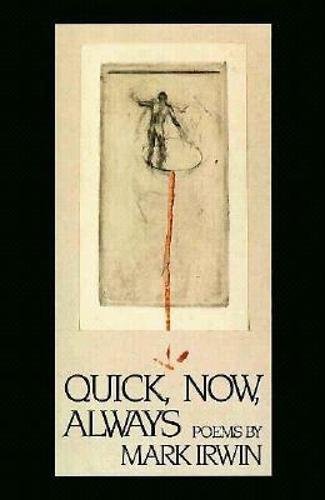 An astonishing collection of poetry that speaks to America at the end of the 20th century.

In this, his third book of poetry, Mark Irwin makes stunning jumps of imagination to create a poetry that is Rilkean in conception and execution, and that speaks to America at the end of the 20th century and to the issues of history, memory, language and consciousness. Irwin's vision is as broad as Whitman's and Hart Crane's, his language propelled by charged rhythms and a lush music. These poems address the American experience, from shopping at Woolworth's to traveling into the Grand Canyon, from the art of Robert Mapplethorpe to that of Andy Warhol, who "watched the working class work and it bored (him) to beauty". At the heart of the collection is the sweeping meditation, "Turbo-Descartes", that probes how our myths and machines effect our memories and desires.

Mark Irwin was born in Faribault, Minnesota and has lived throughout the United States and abroad in France and Italy. He is the author of four previous collections of poetry: The Halo of Desire, Against the Meanwhile, Quick, Now, Always (BOA Editions), and White City (BOA Editions). His poetry and essays have appeared widely in many literary journals. Among his literary awards are National Endowment for the Arts and Ohio Art Council Fellowships, two Pushcart Prizes, the James Wright Poetry Award and a Fulbright Fellowship to Romania. He lives with his family in Denver.