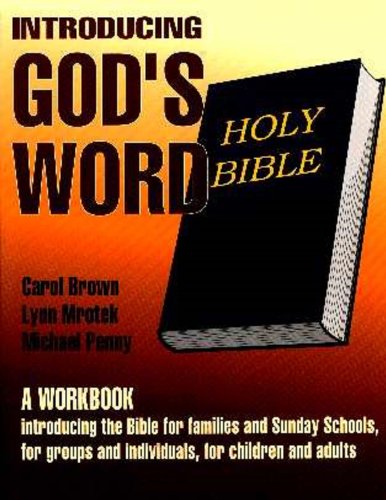 "Introducing God's Word" is a workbook providing a first look at the Bible for familes and Sunday Schools, for groups and individuals, for children and adults. It has sections on the Books of Moses, the History Books, the Wisdom Books, the Prophets, the Gospels, the Acts of the Apostles, the General Letters, the Letters of paul, and the Future. With questions and answers, crosswords and puzzles, word searches and projects, together with background notes, the individual or group and introduced to the main themes of the Bible.

There is a great need for stimulating Bible teaching for early teenagers. They have grown out of coloring and stories, but are not sufficiently mature to read the type of Bible books written for adults. In 1991 when Michael Penny went to be pastor of Grace Church, he found their youth group enthusiastically using a text produced by Lynn Mrotek called 'A first Look at God's Word'. This text had been supplemented with background notes written by Carol Brown. Over the next eight years this short work books was expanded by Michael Penny, edited by Lynn Mrotek and Carol Brown, and tested by the early teens in their Sunday School. The result has been an attractively produced workbook written simply but not childishly. As such it will appeal to anyone of any age who has little or no knowledge of the Bible. The pages are well typeset with many maps, illustrations and cartoons. It uses puzzles, crosswords, word searches, puzzles and projects, to reinforce the teaching of the Bible. This book can be used by individuals or by groups. Not only would Sunday Schools and Vacation Bible Schools find this books of value, so too would familes, to work through together. Home schoolers will find a wealth of valubale lesson material in "Introducing God's Work".

Carol Brown was born in Madison, Wisconsin, in 1949. She graduated from with a BA from Carol College, Waukesha, and earned an MA from Aurora University. She has been involved in public education for over 25 as well as teaching Sunday School. Lynn Mrotek was born in Milwaukee,Wisconsin, in 1949 and about both her degree and her masters from UW-Stout. She has been in public eduation for over 25 and has taught Sunday School. Michael Penny was born in Ebbw Vale in South Wales, GB, in 1943 and obtained his degree from the University of Reading, England in 1963 before entering public schools for 12 years. After that he changed to Christian work and is currently pastor of Grace Church in new Berlin, Wisconsin.