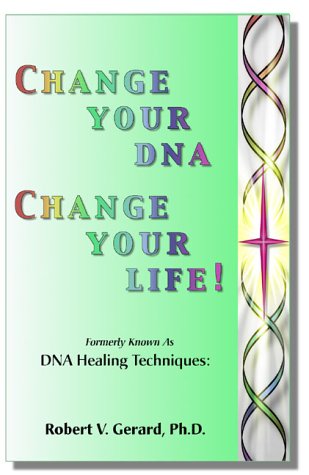 Change Your DNA, Change Your Life is a journey to better health, self-healing, and emotional freedom. It will take you to the edge of your imagination, unlock doors of limitation, and propel your creativity to dimensions of which you once only dreamed. Totally rewritten to reflect feedback from our readers, this new edition (formerly known as DNA Healing Techniques) has been written with YOU mind. It empowers the individual to perform this gift from Source. Tens of thousands of people around the globe have had their DNA Activated, a genetic acceleration to health, joy, and peace. They have reported consistent results and life changes that humanity has long sought to achieve. Now, let the power of your intent reach its highest potential - Self-Empowerment Healings through DNA Activation. Contained within this book are step-by-step instructions that can change your life forever. With these results-oriented techniques you too can experience: Life's purpose & mission, emotional stability, Life without fear, improved nutrition, clarity of thought, detachment from fears; hot-buttons, peace and fulfillment, improved relationships, and spontaneous healings.

About the Author:
Robert Gerard began his working career as a civil engineer. Finding his interests lay with people, not things, he went back to college and completed a B.A. in Social Psychology (1978) and a M.S. in Management/Organizational Psychology (1981). He has also completed all the required course work for doctorates in Education at Georgia State University (1985) and Spiritual Psychology at the California Institute for Integral Studies (1993). In 1998, Robert earned his Doctorate in Spiritual Psychology at the College of Metaphysical Science. He has worked as an Organizational Psychologist specializing in improving communication and resolving conflicts within companies. The experiential methods he used for handling confrontation are presented in his latest book, Handling Verbal Confrontation: Take the Fear Out of Facing Others. Robert's work experience in management and consulting spans over 42 years and crosses major industries: engineering, manufacturing, banking, education, and publishing. Inspired by his inner guidance, Robert started Oughten House Publications in 1992. As a visionary, his publishing company became a world leader in metaphysical and self-mastery books. In July 1997, a major shift in Robert's life occurred: when his DNA was ACTIVATED and the wisdom to bring it into the world. His ability to encode and activate the multi-strand DNA within chromosomes, to heal others, and set into motion cellular and psychological healings was revealed. Presenting these techniques globally became his mission. Robert sustains a private counseling practice with his wife, Zeljka Roksandic, a clairvoyant healer, in his mountain home in Binghamton, New York. He continues to offer lectures, seminars, and workshops on the DNA Self-Healing Techniques, ZeRo Point Healing Coaching, and Confronting Skills Training. In addition to his three healing books, Robert has also written two novels: Lady from Atlantis and The Corporate Mule.
Excerpt. © Reprinted by permission. All rights reserved.:
Scientists and medical researchers have conquered what was deemed impossible fifty years ago. Yet as more is discovered, the opportunity of the unknown reveals itself even more. Our explorations have brought us to the outer limits of the universe, proving that there are at least 250 billion suns within our galaxy and trillions of galaxies within the observed universe. Fantastic? Yes!

Looking within our bodies is equally profound. According to ancient Hermetic Principles, the dynamics of cells are parallel to the dynamics of galaxies. The vast space that exists between the electrons and nucleus of each atom within various molecules is consistently being explored by quantum physics. However, the most powerful electron microscope cannot reveal the basis of life-the magnificent organization of DNA within our own cells. How does DNA sequence itself to contain the specific blueprints for our bodies? What causes aging and disease? Will we ever find out? The answer is YES!

A worldwide initiative, the Human Genome Project, is exploring the genetic code, and has already cost more than was spent putting a man on the Moon. The Associated Press reported (November 24, 1999) that "scientists have sequenced one-third of the human genetic pattern and are on schedule to complete the entire biological blueprint by 2003," according to Dr. Francis Collins, Head of the National Human Genome Project. Dr. Collins stated that "one billion of the three billion chemical base pairs in the genetic pattern have now be identified, sequenced and published on a public database."

Research is still incomplete as thousands of researchers worldwide seek to better understand our DNA. Mapping out the chromosomes, which are made up of DNA, involves over 100,000 genes. Once identified, the "key" to life may be known. But let's go one step further and ask: "Who put the key there?" and "What intelligence is guiding the DNA to perform the most intricate and perfected tasks mankind has ever witnessed?"

The core issue is even more subtle-learning how the cells and their DNA communicate! Once that is identified, the mysteries of life can unfold as we listen to what is being said. Or, maybe, the DNA will listen to us. After you've applied the techniques in this book, your DNA will be changed and so will your life.

The unique attributes of DNA and RNA center around their ability to replicate and communicate. Cell division is a marvelous process which deserves the label "miracle." Did you know that when a cell divides and replicates itself, the entire DNA also replicates itself?

DNA appears to be complex, but it consists mainly of simple sugar and four nitrogenous base molecules. How do they know what to do? Your life depends on the way these molecules think, act, influence and replicate, but do we have a say in what they do? Again, the answer is yes. You do have a say.

The world and our lives are rapidly changing. Time seems to disappear right before our eyes. Predictions of the "end times" are all about us and we ask: "What is really happening?" and "Why?"

It is time for mankind to take a quantum leap for itself. Our mental and physical health has become too dependent on others. We are faced with being led and even misguided by what "they" say. It's always "them." You have a vital part in what you do with your health, when speaking your mind, and creating those things in life which bring you joy. The time is now! Take responsibility for your life-go within. Learn that self-mastery is your gift. You possess all the conscious intent and subtle energies to change your realties, including your DNA. Activate yourself, acknowledge your divine self. Become all you can be! Now is the time to change your DNA and change your life.