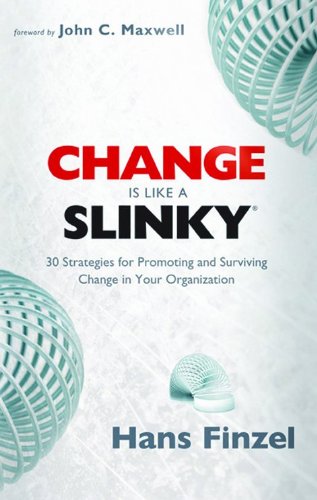 A practical guide to navigate change in today's organizational climate. Change or perish: this is a current motto for leaders in all types of organizations. But how does one adapt to such fast and furious change and effectively lead the organization through change? Hans Finzel provides a proven strategy in Change is Like a Slinky, exploring the six major phases in the cycle of change. As he says, "Change is a lot like a Slinky... A slinky can be a lot of fun, but it is also completely unpredictable." Instead of grudgingly wading through inevitable change, readers will find themselves equipped and fired up to tackle it head on.

HANS FINZEL (D.Miss., Fuller School of World Missions; Th. M., Dallas Theological Seminary) is the president of HDLeaders. He served for 20 years as president of WorldVenture (formerly CBInternational). He and his wife, Donna, spent ten years as missionaries in Eastern Europe, working with WorldVenture to train pastors behind the Iron Curtain. Hans is the author of ten books, including Change is Like a Slinky, Launch Your Encore, The Power of Passion in Leadership, Unlocking the Scriptures, and his bestseller The Top Ten Mistakes Leaders Make. He co-authored The Top Ten Ways to Love Your Wife with his wife. He is the host of the Leadership Podcast, The Leadership Answer Man and is a widely sought-after speaker as an expert in leadership development, change management and international studies. The Finzels make their home in Highlands Ranch, Colorado and have four children.

It took forty years for radio to gain fifty million domestic listeners in the United States. Then it took only thirteen years for television and cable TV to gain fifty million viewers. And the Internet? It took only four years to gain fifty million domestic users. With the advent of PDAs and wireless phones, Internet usage worldwide will exceed 1.1 billion in 2005. That means one of every six residents of planet earth will be using the Internet in 2005.1 And look at the explosion of cell phone usage. Today there are already one billion mobile phone users worldwide. China is adding five million new cell users per month! Name an age-old problem you hardly even imagined would be turned on its ear. I can name you an upcoming technology with a strong chance of solving it within the next twenty years. You name it, and if your organization is founded upon solving the last millennium's paradigms, you're in trouble. I'm not telling you to abandon your mission, but rather to work very, very hard at keeping your coils light. Get ready to adapt to changes of a magnitude that will make your head spin.

7. Change Is Like a Slinky: 30 Strategies for Promoting and Surviving Change in Your Organization