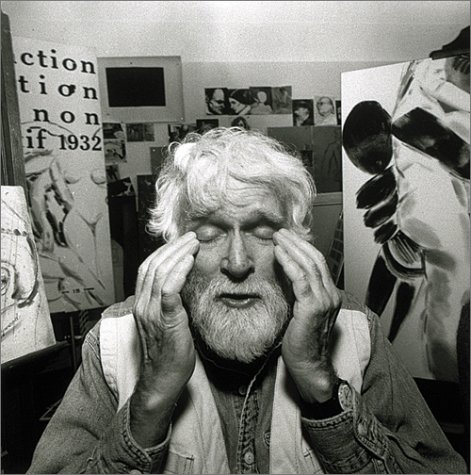 An intimate friendship of more than three decades is chronicled here, along with the aesthetic evolution of two major American artists. R.B. Kitaj's unusual, handsome, troubled, charismatic face has been a rich subject for Lee Friedlander's camera since the two artists became friends in 1970, when both were teaching at the University of California, Los Angeles. Kitaj begins and ends with photographs shot in Los Angeles, and the artist's passage from raw and vigorous young man to grizzly, white-haired prophet is charted through more than 90 images. A frank and moving series of images from 1994, focused on Kitaj during the days following his wife Sandra's sudden and unexpected death, achieve a disarming intimacy that could only have been the result of a deep and trusting friendship. Kitaj includes a reminiscence by Kitaj himself as well as an introduction by Friedlander's wife, Maria.

Lee Friedlander has had a distinguished career as a photographer. Among his many awards are a MacArthur Foundation Award, the grants from the National Endowment for the Arts, and three Guggenheim Fellowships. He has published several books, among them "Self-Portrait", American Musicians", Letters From the People", "Little Screens", and "The Desert Seen". He lives in New York state.
R.B. Kitaj was born in Cleveland, Ohio in 1932. He was a merchant seaman before becoming a student at the Royal College of Art. Though he worked in London for most of his adult life, he moved to Los Angeles in the late 1990s, where he continues to paint and live today.