Items related to Chameleons: Care and Breeding of Jackson's, Panther,... 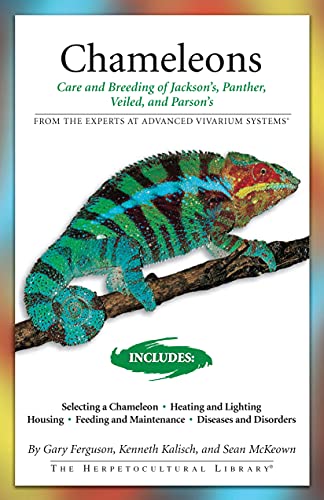 The one and only chameleon is world renowned for its ability to change its skin color rapidly (throughout movement of pigment cells) and for the outrageous length of its tongue (more than one and a half times its body length!). Relatives of agamids and iguanas, chameleons are insect-eating, tree climbing reptiles that have highly specialized needs. Written by a team of experienced herp experts, Chameleons intends to instruct keepers on how to best care for their chameleons and covers the four most commonly kept species: Jackson’s chameleon with its prized triceratops horns on its head, panther chameleon with its spectacular coloration, veiled chameleon with its unusual casque on its head, and the rather large Parson’s chameleon. The book subsequently is divided into four parts, each including an introduction and natural history, captive care, and reproduction of the species. Part I, Jackson’s Chameleon was written by Sean McKeown; Part II, Panther Chameleon by Gary Ferguson, James B. Murphy, Achille Raselimanana, and Jean-Baptiste Ramanamanjato; Part III, Veiled Chameleon and Part IV, Parson’s Chameleon by Kenneth Kalisch. References and index included.

Gary Ferguson has written many books on nature and science including Hawks Rest, the first nonfiction work to win both the Pacific Northwest Booksellers Award and the Mountains and Plains Booksellers Award for Nonfiction, Decade of the Wolf, The Great Divide, and The Carry Home. His articles have appeared in Vanity Fair, the Los Angeles Times, and other publications. His lectures on wilderness are a culmination of 30 years researching—and experiencing—the marriage of wild lands, history, myth, and narrative psychology. Visit him at wildwords.net.

Chameleons : Care and Breeding of Jackson's, Panther, Veiled, and Parson's

Chameleons: Care and Breeding of Jackson's, Panther, Veiled, and Parson's

CHAMELEONS: CARE AND BREEDING OF

Shipping: US$ 30.66
From United Kingdom to U.S.A.
Destination, rates & speeds