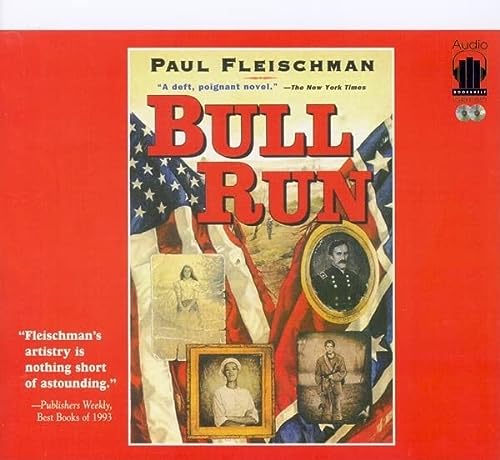 Sixteen voices -- not the heroes, not those who would become eulogized in history books and synonymous with the glory of war. No, these are the voices of the common soldiers and their leaders, their families, their comrades. North/South, white/black, adult/child -- a disparate and compelling choir of voices. Newbery Medal winner Paul Fleischman has written a tour de force that lends itself perfectly to multivoiced narration. From eager eleven-year-old Toby Boyce to Colonel Oliver Brattle, who has seen it all and knows the true face of war, these many voices are skillfully woven together -- creating an intimate tapestry of naïveté, broken dreams, and carnage that transports the listener to the front lines of the Battle of Bull Run. Paul Fleischman makes an appearance as the voice of James Dacy and concludes this unique production with a personal author's note -- allowing us to glimpse into his beginnings as a writer, as well as how Bull Run came to be written.

A Civil War drama told in sixteen voices, this ‘is a heartbreaking and remarkably vivid portrait of a war that remains our nation’s bloodiest conflict.... Fleischman’s artistry is nothing short of astounding.’ —Publishers Weekly. ‘Fleischman has done what he does best—create a unique piece of fiction with echoes of his poetry throughout.’ —H. ‘Outstanding... unforgettable as historical fiction... an important book for every library.’ —SLJ.

PAUL FLEISCHMAN grew up in Santa Monica, California, in a house with a printing press, a grand piano, a shortwave radio, and his father -- children's author Sid Fleischman. Playing recorder in early music consorts led to his books of verbal duets: I Am Phoenix, Joyful Noise (winner of the 1989 Newbery Medal, and Big Talk. His novels built from monologues include Bull Run, a sixteen-character account of the Civil War's first battle, and Seedfolks, the chronicle of the first year of a Cleveland community garden. His interest in theater inspired his young adult novels Mind's Eye, Seek, and Breakout, all of which revolve around the spoken word. His historical fiction includes Saturnalia and The Borning Room. He's written nonfiction and picture books as well, including Time Train, Weslandia, and Sidewalk Circus. Alongside the Newbery Medal, he's won a Newbery Honor Book, the Scott O'Dell Award for Historical Fiction, the PEN West Literary Award, the California Young Reader Medal, and most recently was a finalist for the 2003 National Book Award. He makes his home in the village of Aromas, California.