Items related to The Grail Murders: Being the Third Journal of Sir Roger...

The Grail Murders: Being the Third Journal of Sir Roger Shallot Concerning Certain Wicked Conspiracies and Horrible Murders Perpetrated in the Reign 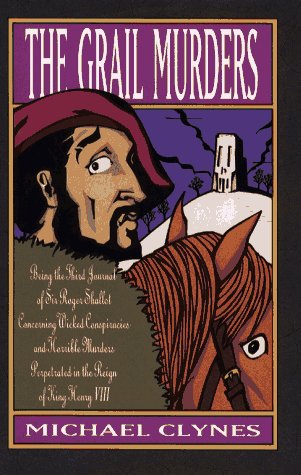 When Stafford, Duke of Buckingham, is executed for treason, the rogue Roger Shallot and solemn Benjamin Daubney are ordered to watch and then to find what Stafford sought--the Holy Grail and Excalibur--or meet Stafford's fate themselves.

A third helping of braggadocio from the pen of rascally old courtier and raconteur Sir Roger Shallot (The White Rose Murders, 1993, etc.). This time, the plot is kicked off by Henry VIII's execution of the Duke of Buckingham on suspicion of seeking (and finding?) the twin treasures of King Arthur's sword, Excalibur, and the Holy Grail. The king wants the priceless relics for himself to strengthen his dynastic claims against the house of York; so does Cardinal Thomas Wolsey's Machiavellian prince of spies, Sir Edmund Mandeville; so (it's rumored) do the surviving underground remnants of the outlawed Knights Templar. When Wolsey packs his nephew Benjamin Daunbey, Shallot's master, off to Buckingham's manor at Templecombe, he starts a treasure hunt (fueled by the doggerel clue, ``Beneath Jordan's water Christ's cup does rest,/And above Moses' Ark the sword that's best'') that's also a race against a killer who's dispatching the searchers on a grand scale. There's murder by garroting, by runaway horse, by burning bed in locked room--seven homicides in all, not to mention miscellaneous deaths by trumped-up duels and executions. Yet the whole affair is oddly dispirited, enlivened only by Shallot's endless drip, drip, drip of self-aggrandizing anecdotes and citations of the great lines he gave his buddy Will Shakespeare. Shallot, who's clearly meant to be irresistible but is actually as tiresomely gassy as a congressional subcommittee, takes all the momentum out of a narrative that could have been whimsically or mystically effective in firmer hands. -- Copyright ©1994, Kirkus Associates, LP. All rights reserved.

That Falstaffian rascal, Sir Roger Shallot, thief, liar, coward and friend of Shakespeare, recalls a case in which he and his master, Benjamin Daunbey, solve seven murders during the reign of "that limb of Satan," Henry VIII. Another object of Roger's hatred is devious Cardinal Wolsey, uncle of sobersided Benjamin, who orders the pair to attend the execution of the Duke of Buckingham, accused of treason. Soon Roger and Benjamin are investigating the duke's links to the Knights Templar, the military-religious order that opposes the Tudor line and supposedly has custody of the Holy Grail and King Arthur's sword, Excalibur. Also compelled to witness Buckingham's execution are Sir John Santerre, his wife and their beautiful daughter Rachel, who catches Shallot's roving eye, and Sir Edmund Mandeville, a sinister royal spy. All are caught up in a series of deaths-including the murder of a witch-at the Santerre mansion in Somerset. Roger and Benjamin almost drown before they solve the murder and recover what may be, but probably isn't, the Holy Grail. Clever entertainment from the author of The Poisoned Chalice.
Copyright 1994 Reed Business Information, Inc.

1. The Grail Murders: Being the Third Journal of Sir Roger Shallot Concerning Certain Wicked Conspiracies and Horrible Murders Perpetrated in the Reign

3. The Grail Murders: Being the Third Journal of Sir Roger Shallot Concerning Certain Wicked Conspiracies and Horrible Murders Perpetrated in the Reign

4. The Grail Murders: Being the Third Journal of Sir Roger Shallot Concerning Certain Wicked Conspiracies and Horrible Murders Perpetrated in the Reign