Items related to Those Jordan Girls 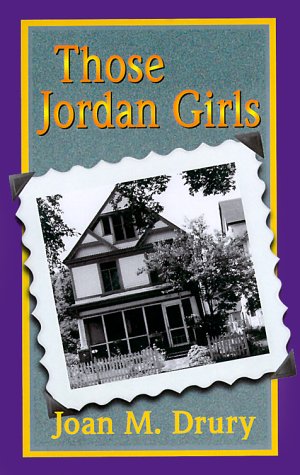 Fiction. With THOSE JORDAN GIRLS, the author of the Tyler Jones mystery trilogy (including CLOSED IN SILENCE) delivers a family novel that follows four generations of women living together in small-town Minnesota. Narrated by Maddie, the youngest, the story centers around matriarch Gummie, a strong and independent woman who finds her way to the forefront of every major twentieth-century social movement while raising a daughter, granddaughter and great-granddaughter to follow in her footsteps. Julia Alvarez (How the Garcia Girls Lost Their Accents) commented, Every word rings true. We feel a part of this unusual family, one of those Jordan girls, eagerly turning the pages to find out where we came from and who we are.

Four generations of uninhibited and unconventional women (the Jordan "girls") live together in a big old house in a small Minnesota town in Drury's well-intentioned if wandering novel. The narrator is Madelaine Iris Jordan, called Maddie, who is 10 years old in 1962 when the story begins. Maddie's great-grandmother, Iris, called Gummie, is the recently widowed matriarch of the family and a lifelong social activist. As publisher of the local weekly newspaper for 53 years, she promotes left-wing causes ranging from early 20th-century women's rights to civil rights in the '60s. Her daughter, Hester, named for Gummie's favorite literary heroine in Hawthorne's Scarlet Letter, is known as Gramma. She acquired her self-assurance by becoming a nurse and supporting her daughter, Jane, and herself after being abandoned by her husband early in her marriage. Jane, the third generation female in this socially defiant clan, calculatedly bore Maddie out of wedlock; she wanted a child, but not a husband. Maddie has a prodigious curiosity about the lives of her forebears, and the narrative is knit together out of q&a sessions between Maddie and Gummie. These sessions serve not only to reveal the family history, but also to showcase iconoclast Gummie's commitment to atheism and communism, as well as to justice, friendship and self-assurance. Part social history, part spirited defense of unconventional female behavior, the narrative lacks plot and reads more like a tribute than a novel, but the Jordans' story is warmly told and honestly inspiring. (June)

Maddie, the fourth generation of indomitable Jordans, narrates this heartfelt memoir of growing up in a multigenerational household of fiercely activist women. An oral historian, she passes down the stories she has always been told by great-grandmother Gummie, grandmother Hester, and mother Jane. Together, these generations are living witnesses to a range of historically significant events, from women's suffrage, temperance, and populism to agrarian reform, labor unrest, the Great Depression and the New Deal, the witch hunts of the 1950s, and any number of strikes, boycotts, and marches. As the beneficiary of this rich legacy, Maddie, who is ten when the book opens, cajoles ever more information from her mothers (as she calls the three women), carefully comparing their accounts. In some instances, the tone veers into the didactic, and, occasionally, the book becomes overly sentimental. Yet these minor flaws take nothing away from the powerful, eloquent voices of this narrative of most of the pivotal American reform and protest movements. The editor and publisher of Spinsters Ink, Drury (Silent Words; Closed in Silence) has written an inspiring book, particularly for adolescent girls.DLisa Nussbaum, Euclid P.L., OH
Copyright 2000 Reed Business Information, Inc.