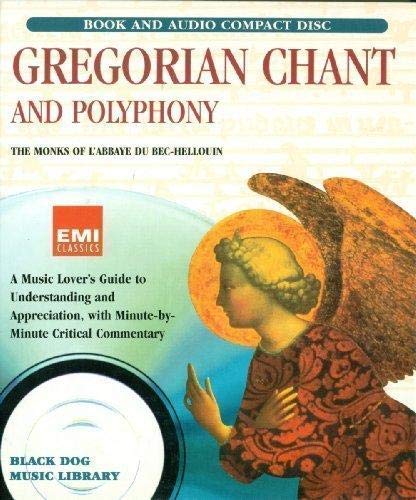 The Roman Catholic Church, seeking to be more "relevant" to its flock in the antispiritual climate of the second half of the 20th century, abandoned its ancient Latin liturgy and dignified music in favor of poorly worded vernacular texts and worse music. This music usually tends toward banal couplets set to insipid tunes strummed on ill-tuned guitars and whined into a microphone to the banging of a tambourine. Ironically, as we now careen toward the millennium, more and more Americans are discovering the importance of the spiritual side of their lives and yearning for depth and meaning. In the process, they have snapped up recordings of Gregorian chants and turned them into crossover hits.

Actually, most of those compact discs have a healthy helping of polyphony thrown into the mix, since plain Gregorian chant is actually monophonic--with only one voice line and no harmony whatever--and tends to be a bit dull after a while. This volume from the Black Dog Library (with music supplied by EMI in the form of a CD nestled inside the front cover) is one of the strongest in the series in terms of its text. Author David Foil does some of his best work in his explanations of chant (and polyphony) and its centuries-old heritage; as usual, there are plenty of handsome illustrations in varying degrees of relevance to the subject matter, and a good, if older, recording, remastered and reissued.

The CD contains material by the Monastic Choir of l'Abbaye du Bec-Hellouin. And while it is well sung and contains some of Gregorian chant's greatest hits, it's a bit problematic in a couple of ways, and because of that a rather odd choice for EMI to put in this series. First, this community includes both nuns and monks, who join together to form a choir--which is actually more interesting to listen to than the usual all-male chorus, but it is not (for those with an interest in historic correctness) what would usually occur in the heyday of Gregorian chant. The music also wanders a bit from the style advertised in the copy, with several pieces in French, a language that would not have been heard in any official capacity in medieval choir music. There is a lovely little psalm setting in the vernacular by 16th-century French composer Claude Goudimel, who was slaughtered with his fellow Huguenots in the St. Bartholomew's Day Massacre of 1572; such ecumenicism is one of the happier byproducts of our own time. The recording wanders even further to include a setting of the Lord's Prayer written for the liturgy of the Russian Orthodox Church by the decidedly nonmedieval composer Nikolai Rimsky-Korsakov. It's a nice enough recording, but caveat emptor when it comes to its historic authenticity. --Sarah Bryan Miller

David Foil is a music producer, writer, and critic.