Items related to The Sensuous and the Sacred: Chola Bronzes from South...

The Sensuous and the Sacred: Chola Bronzes from South India 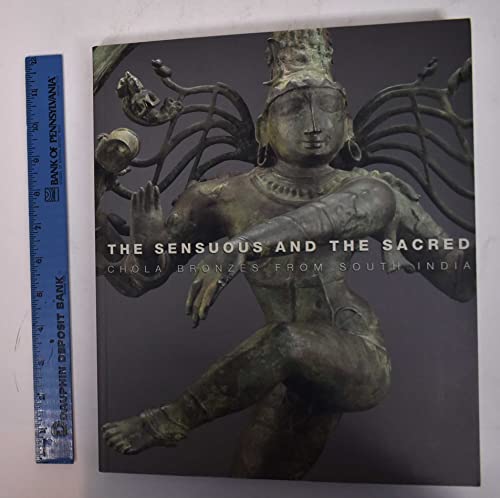 "The Sensuous and the Sacred" focuses on the exquisite temple bronzes produced during the Chola period, a time of unparalleled creativity in the history of the Indian subcontinent. By the beginning of the tenth century, Hindu devotees began to visualize their deities as having public personas not unlike those of human monarchs. Worshipped as living entities, the deities participated in a variety of daily, weekly, monthly, and annual rituals and festivities; to fulfill these functions, portable images were required. Thus were created the spectacular temple bronzes of south India. For more than four hundred years, from the ninth to the thirteenth century, the Chola dynasty was the dominant cultural, artistic, religious, and political force in south India. During the golden age of Chola rule, music and dance, poetry and drama, philosophy and religious thought, and the arts of sculpture, bronze-casting, jewelry-making, painting, and architecture reached new heights. The temple was the center of all activity, and the Cholas built and decorated some of the most impressive temples in south India. These were primarily Hindu, though Buddhist and Jain shrines were also supported by Chola royalty. Vidya Dehejia holds the Barbara Stoler Miller Chair in Indian Art at Columbia University. Other contributors include Richard H. Davis, R. Nagaswarmy, and Karen Pechillis Prentiss.

With an opening chapter entitled "Chola Bronzes: How, When, and Why," this scholarly encomium draws in the uninitiated from the outset, documenting an art form that remains part of daily life and ritual for Hindus in southeastern India. Chola "temple bronzes"-so-named because they are used in the worship of Vishnu, Shiva (along with his consort Uma) and other Hindu gods-were produced in the Tamil-speaking region of South India during the reign of the Chola dynasty in the 9th through the 13th centuries, using the still-existing "lost wax" technique. Dehejia, a professor of Indian art at Columbia, presents 185 illustrations (160 in color), carefully explaining poses (often via ancient verse), ornamentation and regional differences among the figures, which are often depicted as female, exquisitely proportioned and fecund. The book's title captures the bronzes' unique fusion of spiritual attainment and physical allure, still not widely known (or comprehended) in the West. In that sense, this work makes an excellent introduction to a worldview quite different from the scientific one, which splits off the spiritual from physical life; Dehejia and the four other scholar-essayists here neither exoticize the figures nor play down their very real attractions. The book serves as the catalogue to an exhibition on view until March at the National Museum of Asian Art for the United States, part of the Smithsonian Institution in Washington, D.C.
Copyright 2003 Reed Business Information, Inc.

1. The Sensuous and the Sacred: Chola Bronzes from South India