Items related to Mexico: 40 Activities to Experience Mexico Past &... 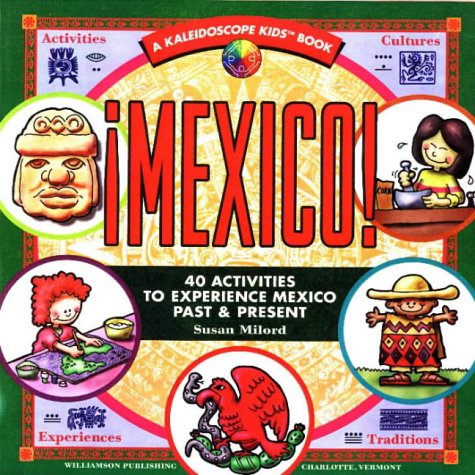 Discusses the history, language, religion, customs, and daily life of Mexico, using a variety of activities to reinforce the information

Grade 3-7-Milord provides an amazing amount of information about Mexico, ranging from ancient history through the Spanish conquest to contemporary life. Activities include such standards as making an Ojo de Dios and a pi?ata, but there are also directions for creating marzipan skulls for the Day of the Dead celebration, as well as recipes for salsa, tortillas, and hot chocolate. Maps show the present-day Mexican states, the location of pre-Hispanic cultures, and the areas annexed to the United States. Also included are a list of Spanish words and phrases with phonetic pronunciation, a Spanish game, an explanation of the Maya numbering system, and sidebars giving brief biographical information about famous Mexicans from Emperor Moctezuma II to Carlos Fuentes. Reproductions, drawings, and lively cartoons of children doing the activities appear throughout. Yvonne Y. Merrill's Hands-on Latin America (Kits, 1997) has some of the same projects as well as cultural information; however, since it covers a larger area, there is less information on Mexico. This is also true of Judith H. Corwin's Latin American and Caribbean Crafts (Watts, 1992), which contains mostly projects without cultural information. Florence Temko's Traditional Crafts from Mexico and Central America (Lerner, 1996) is for younger children and has fewer crafts. This is an excellent starting point for students investigating this culture.
Pam Gosner, formerly at Maplewood Memorial Library, NJ
Copyright 1999 Reed Business Information, Inc.

"Finally, a book about Mexico of which Mexicans themselves would say '¡Bravo!'" -- ForeWord Magazine