Items related to Calvinism and Communion in Victorian England: Studies... 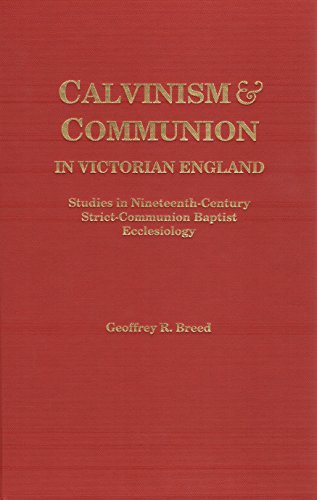 By Geoffrey R. Breed "This study illustrates tensions between Particular and Strict Baptists during the first quarter of Queen Victoria's reign. Two hitherto untapped sources of Baptist history are explored: the Minutes of the London Association of Strict Baptist Ministers and Churches (LASBMC), 1846-1855 and the Ramsgate Chapel Case of 1862. At the beginning of the nineteenth century almost every Particular Baptist church in England practiced strict or closed communion, insisting upon believers' baptism by immersion as the prerequisite to both membership and communion. As the century progressed, some Particular Baptist churches opened their communion table to those of the household of faith who had not been baptised as believers. Nevertheless, they still classified themselves as Particular Baptist churches. They followed the teaching of Robert Hall Jr. (1764-1831), who argued functionally from God's blessing on united missionary endeavour that the union which God chose to bless in mission ought not to be divided at the table. Others adhered to the teaching of Joseph Kinghorn (1766-1832) and his disciple, William Norton (1812-1890), who held that, unless Baptists made believers' baptism an essential qualification for communion, they would lose all distinctiveness. This 'strict' position was the basis of membership of the LASBMC, an association which functioned from 1846 to 1855." - from the author's Preface. This book also re-examines the views of C. H. Spurgeon on the Communion issue in light of an interview he had late in his ministry with a Virginia Baptist pastor and contains a reprint of David Griffith's outstanding treatise on "Baptist Associations and Articles of Belief" (1840), in which he argues the necessity of having stated doctrinal beliefs. Hardbound in dark red grade B cloth vellum with black spine label and gold stamping. 646 pages. Illustrated. Comprehensive Index of Persons, Subjects and Churches.