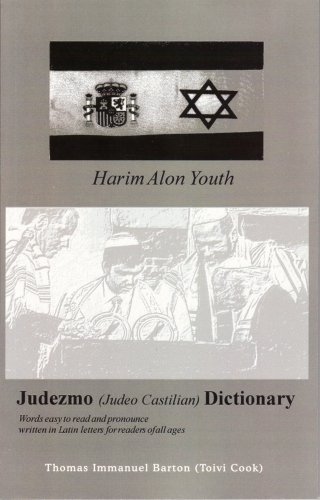 Thomas Immanuel Barton, is part of Harim Alon Youth and is also known as Toivi Cook. He is part of the Jewish Sephardic heritage and lives in the USA. He loves his heritage and wishes to preserve the language that is now rarely used, "Judezmo". During the Holocaust, 80 percent of the Judezmo speaking Jews were decimated at the hands of the Nazis. It is the language of the Jews who lived in Spain before the 1492 expulsion. It is the Sephardic Jewish equivalent to the Yiddish language of the Ashkenazi Jews who lived in Germany.

Thomas is a teenager who studied 5 years of Hebrew school and does volunteer work in animal rescue. He is very compassionate and caring towards others. At the age of 10 and 11 years old he was trained to be the Gabay's assistant by Sam Moskowitz in the Synagogue. Thomas studies French in school and likes to watch Monk, Law and Order and WWE wrestling with his family. He always looks forward to Chanukah and Pesach as his favorite times of the year. His favorite songs are Hava Nagila, Arvolikos de Almedra and Avraham Avinu.