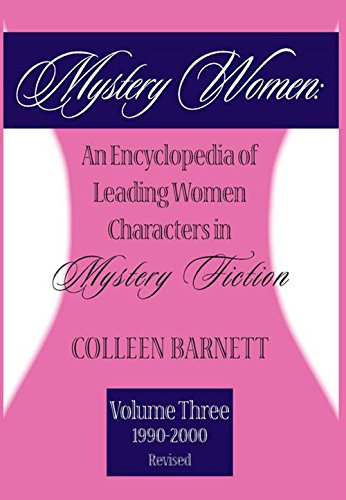 Many bibliographers focus on women who write. Lawyer Barnett looks at women who detect, at women as sleuths and at the evolving roles of women in professions and in society. Excellent for all women's studies programs as well as for the mystery hound.

I began working on the "Mystery Women" series in 1975, combining my personal addiction to mystery novels to my interest in how females are portrayed in the media. Volume 1 covered the period from 1860-1979 during which females rose beyond traditional roles as victims or villianesses to that of protagonists. The research unearthed female characters new to me: the first divorced sleuth, the first medical sleuth, the first legal sleuth. The biographies of the individuals were set against the legal and social structure of the period in which the books were written. The series continued with Volume 2 (1980-1989)nominated for an Agatha; and Volume 3 (1990-1999) nominated for both an Edgar and an Agatha.

Colleen Barnett has been a fan of mystery fiction since her early teens. Nancy Drew, Judy Bolton, and the Dana Sisters led her to Tuppence Beresford, Helene Brand Justus, Arabella Blake, and others. Colleen was educated at St. Joseph's Academy in Green Bay; then earned BA, MA and law degrees at the University of Wisconsin in Madison. Her career was put on hold while she and her husband, Attorney John Barnett raised seven children, but she continued to read mysteries for recreation. When the costs of college for the children mounted, Colleen worked as a volunteer coordinator and then a social work supervisor for Grant County Social Services in Wisconsin. Having dropped out of law school to marry, she returned later to earn her law degree. Her practice was primarily in family law including divorce, child advocacy, and mediation. She also taught American Government at the University of Wisconsin-Richland in Richland Center, WI. Both Colleen and John are currently retired, living in Boscobel, Wisconsin and enjoying visits with their children and grandchildren. She is a member of Sisters in Crime.