Items related to Taken by the Enemy (The Blue & Gray Series)

Optic, Oliver Taken by the Enemy (The Blue & Gray Series)

Taken by the Enemy (The Blue & Gray Series) 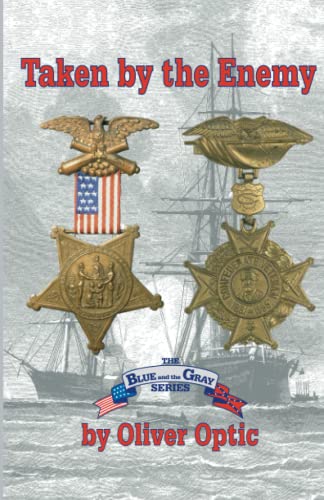 Oliver Optic wrote some 125 books and more than a thousand stories for children. Among the best of these stories is The Blue and the Gray Series about the War Between the States. This is the first book in that series of six and introduces characters and events which figure in the subsequent books of the series. This book makes the events of the Civil War real and personal to the young reader and gives a historical picture of that war that will broaden their view of this period of our history.

Recommended for Ages 10 and up.

"This is the most astounding news!" exclaimed Captain Horatio Passford. It was on the deck of the magnificent steamyacht Bellevite, of which he was the owner; and with the newspaper, in which he had read only a few of the many headlines, still in his hand, he rushed furiously across the deck, in a state of the most intense agitation.

War between the states. It was unthinkable to Captain Passford, and many like him, but now it was a reality. Captain Passford and his family are Northerners, but like many other families, his brother lives in the South. Worst of all, Captain Passford's daughter Florrie is down South with her uncle. Determined to return Florrie to her home for the duration of the war, the Captain and his son Christy travel through enemy lines to bring her back North. An imaginative storyteller, Oliver Optic uses this combination of fictional and historical events as the background for a rattling good adventure story.

Oliver Optic wrote some 125 books and more than a thousand stories for children during the last half of the nineteenth century. Among the best of his stories is the Blue and the Gray Series about the Civil War. Taken by the Enemy is the first book in the series of six and introduces characters and events which figure in the subsequent books, giving children a personal as well as a historical picture of the Civil War that will broaden their horizons with every fresh page.

Includes a Build-Your-Vocabulary Glossary of some 330 words and definitions. Each word is cross-referenced with its page number so children can easily go back and see how it is used in the story.