Items related to A Tapestry of Kinship: the web of influence among escultores...

Jose Antonio Esqibel (Author), Charles M. Carrillo (Author) A Tapestry of Kinship: the web of influence among escultores and carpinteros in the parish of Santa Fe, 1790-1860

A Tapestry of Kinship: the web of influence among escultores and carpinteros in the parish of Santa Fe, 1790-1860 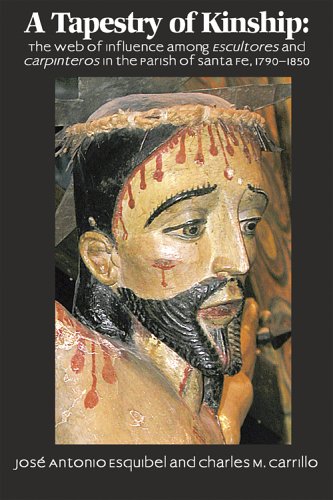 A Tapestry of Kinship is an exploration of the connections between the various artisans working in Santa Fe between 1790 and 1860. This book establishes for the first time the family relationship between Jose Rafel Aragon and Jose Aragon, and the working relationships between the two Aragon brothers and Jose Manuel Benevides (previously known as the Santo Nino Santero) and Jose Anastacio Casados.

Jose Esquibel is a genealogical researcher and author of over seventy articles related to Spanish colonial genealogy and history with particular regard to New Mexico. With John Colligan, he is the co-author of The Spanish Recolonization of New Mexico: An Account of the Families Recruited in Mexico City, 1693, and, with Christine and Douglas Preston, The Royal Road: El Camino Real from Mexico City to Santa Fe. Dr. Charles M. Carrillo is a scholar, teacher, and lecturer, as well as an artist. He has been a participant at Spanish Market in Santa Fe for over twenty years and has won numerous awards. His work is exhibited in many major museums including The Heard Museum, Denver Art Museum, Regis University, Albuquerque Museum, Museum of Spanish Colonial Art, and the Smithsonian. He is the author of Hispanic New Mexican Pottery (1996) and A Tapestry of Kinship (co-authored with José Antonio Esquibel, 2004); he has also written many articles on New Mexico art and culture. Carrillo earned his doctorate in anthropology from the University of New Mexico and is currently an Adjunct Professor in the University of New Mexico’s Religious Studies Program. A book on Carrillo and his art, Charlie Carrillo: Tradition & Soul, was published by LPD Press in 1994. The first Santos of the Pueblos exhibit at the Indian Pueblo Cultural Center in 2003 was so popular that an expanded version of the show was installed in its new gallery in 2004. Carrillo lives in Santa Fe with his wife Debbie, who is an award-winning potter, and their two children, Estrellita and Roán, who have also won awards for their santos.

A serious work written invitingly so that everyone can enjoy what they have discovered. --The New Mexican

These inter-relations formed a tapestry that underscored the outburst of creativity in the production of devotional art among Nuevomejicanos. --People of God August 2004

1. A Tapestry of Kinship : The Web of Influence of Escultores and Carpinteros in the Parish of Santa Fe, 1790-1850

Book Description LPD Press. Paperback. Condition: Very Good. A copy that has been read, but remains in excellent condition. Pages are intact and are not marred by notes or highlighting, but may contain a neat previous owner name. The spine remains undamaged. At ThriftBooks, our motto is: Read More, Spend Less. Seller Inventory # G1890689084I4N00

2. A Tapestry of Kinship: the web of influence among escultores and carpinteros in the parish of Santa Fe, 1790-1860

Book Description LPD Press, 2004. Condition: Good. A+ Customer service! Satisfaction Guaranteed! Book is in Used-Good condition. Pages and cover are clean and intact. Used items may not include supplementary materials such as CDs or access codes. May show signs of minor shelf wear and contain limited notes and highlighting. Seller Inventory # 1890689084-2-4

3. A Tapestry of Kinship

Book Description Rio Grande Books 2009-05-01, 2009. Paperback. Condition: Very Good. Item is in very good condition. If supplemental codes/CDs for textbooks are required please contact us prior to purchasing as they may be missing. Seller Inventory # DS-1890689084-2

4. A Tapestry of Kinship: the web of influence among escultores and carpinteros in the parish of Santa Fe, 1790-1860