Brown, Jeffrey Every Girl Is The End Of The World For Me

Every Girl Is The End Of The World For Me 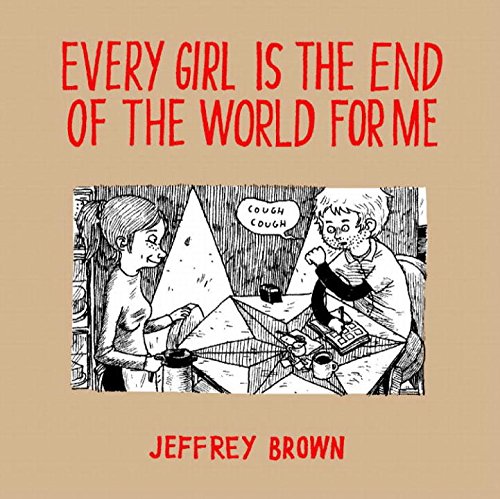 Jeffrey Brown is the best selling author and illustrator of the middle grade Jedi Academy series, as well as the Darth Vader and Son series. When he was a kid, Jeffrey always dreamed of growing up to draw comics and make books for a living—and now he’s living that dream! Jeffrey has written a number of autobiographical books for adults (Clumsy, Unlikely, and A Matter of Life, among others, all from Top Shelf Productions), humorous graphic novels about cats (Cat Getting Out of a Bag, Cats Are Weird, from Chronicle Books), and parodies like Incredible Change-Bots (and its two sequels, all also from Top Shelf).

His most recent project has been 40,000 years in the making: Lucy & Andy Neanderthal! Lucy and Andy are a brother and sister living in the stone age, where they struggle to survive mammoths, cave bears, and their own sibling rivalry. Lucy & Andy Book Two: The Stone Cold Age is available now.

Brown follows his autobiographical Clumsy (2003), Unlikely (2003), and AEIOU (2005), which recount a series of disastrous relationships, with a day-by-day chronicle of his interactions with five girls (his word) over the course of three weeks. The most unsettling is troubled free-spirit Allisyn, Brown's first romance (the subject of Clumsy), who re-insinuates herself into his life. The sweetest is Stephanie, who works at the coffeehouse he hangs out at; he is willfully oblivious to her crush on him. Visiting pen-pal Lisa and former roommate Thu have little more than cameos here. Unlike the dramatic, relationship-altering events that shaped Brown's other stories, small moments make up Every Girl, and the rhythms of Brown's everyday life--day job, drawing sessions, video viewing, partygoing, all depicted in his disarmingly shaky drawing style--enhance the aura of the quotidian. If Brown's coterie of sympathetic fans will be relieved at the absence of dudgeon and drama, they're likely also to wish, a bit guiltily, for a little frisson-gendering angst to jack up the energy level. Gordon Flagg
Copyright © American Library Association. All rights reserved

1. Every Girl Is The End Of The World For Me

2. Every Girl Is The End Of The World For Me

3. Every Girl Is The End Of The World For Me [Paperback] Brown, Jeffrey

4. Every Girl Is The End Of The World For Me [Paperback] Brown, Jeffrey