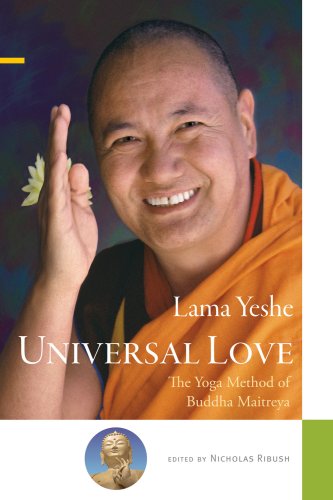 Excerpts from Universal Love: ...when we study Buddhism we re studying ourselves--the nature of our body, speech and mind--the main emphasis being on the nature of our mind and how it works in everyday life. The main topic is not something else, like what is Buddha, what is the nature of God or things like that. Why is it so important to know the nature of our own mind? It's because we all want happiness, enjoyment, peace and satisfaction and these experiences do not come from ice cream but from wisdom and the mind. Therefore we have to understand what the mind is and how it works. ...tantra is the right practice for Westerners and of the utmost need in this twentieth century. After all, the Buddha wanted us to have as much perfect pleasure as possible; he certainly didn t want us to be miserable, confused or dissatisfied. Therefore we should understand that we meditate in order to gain profound pleasure, not to beat ourselves up or to experience pain. If entering the Buddhist path brings you nothing but fear and guilt then it s certainly not worth the effort. ...Maitreya is the manifestation of the love of all the buddhas--the supreme beings who have achieved limitless, universal love. When we practice the yoga method of Buddha Maitreya we unify with the universal love energy that is Maitreya by developing to their ultimate extent the limited qualities of love, compassion and purity that presently lie within us.

Lama Thubten Yeshe was born in Tibet in 1935. At the age of six, he entered the great Sera Monastic University, Lhasa, where he studied until 1959, when the Chinese invasion of Tibet forced him into exile in India. Lama Yeshe continued to study and meditate in India until 1967, when, with his chief disciple, Lama Thubten Zopa Rinpoche, he went to Nepal. Two years later he established Kopan Monastery, near Kathmandu, in order to teach Buddhism to Westerners. In 1974, the Lamas began making annual teaching tours to the West, and as a result of these travels a worldwide network of Buddhist teaching and meditation centers the Foundation for the Preservation of the Mahayana Tradition (FPMT) began to develop. In 1984, after an intense decade of imparting a wide variety of incredible teachings and establishing one FPMT activity after another, at the age of forty-nine, Lama Yeshe passed away. He was reborn as Ösel Hita Torres in Spain in 1985, recognized as the incarnation of Lama Yeshe by His Holiness the Dalai Lama in 1986, and, as the monk Lama Tenzin Osel Rinpoche, began studying for his geshe degree in 1992 at the reconstituted Sera Monastery in South India. Lama s remarkable story is told in Vicki Mackenzie s book, Reincarnation: The Boy Lama (Wisdom Publications, 1996).

This is truly a book for everyone, and probably one of the most important to have among your Buddhist book collection. By pulling together some of Lama Yeshe s introductory teachings on Buddhism, meditation, compassion and emptiness, and combining them with the definitive explanation of tantra, this one valuable volume will inspire students to go more deeply into the Yoga Method of Buddha Maitreya a tantric practice. But isn t tantra secret? you ask. By now so many books have been published on tantra that the Dalai Lama himself said that appropriate books should be published, to correct mistakes made by inauthentic writers. Lama helps us to understand all the ways we can use meditation to develop transformation and gain transcendent experiences. It s still important to find a fully-qualified teacher like Lama or seek out a group deity yoga retreat, but this new offering from the Lama Yeshe Wisdom Archive is a very good explanation of Universal Love. Highly recommended. --Mandala magazine