Items related to Blood And Ivory: A Tapestry

Blood And Ivory: A Tapestry 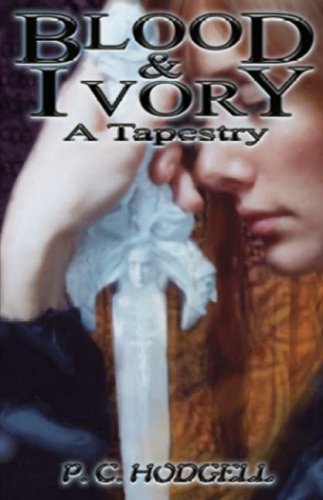 Who was Kindrie's father? What triggered the massacre of the Knorth women? What happened the night Jame was driven out by Ganth? Jamethiel Priest's-Bane first entered our lives when she walked out of the Haunted Lands on the opening page of God Stalk in 1982 with the haunts on her trail, searching for her ten-year older twin brother Tori to give him their father's sword and ring. But what was she doing in the Haunted Lands in the first place? What happened that caused her to leave her home? For the past 20 years, this has been one of the biggest mysteries of Jame's background. The answers to those questions-and others-are found in the pages of this collection. The original edition of Blood and Ivory first appeared in 1994, and included four short stories featuring Hodgell's signature character, Jame. This new edition, Blood and Ivory: A Tapestry is far more than just a reprint. Our edition includes not only the four original stories, but four new ones as well, written specifically for this collection: Three featuring Jame and the fourth one an original Sherlock Holmes tale. Pat has also written brand new introductions for each story, so the reader gets a fuller picture of Jame's life. These stories explore different facets of Jame's life and background and weave a lush and complex picture of this enigmatic figure. Blood and Ivory: A Tapestry also features a gallery section of artwork by P. C. Hodgell, much of it never published before.

This new edition, Blood and Ivory: A Tapestry, is far more than just a reprint. Our edition will include not only the four original stories, but four new ones as well, written specifically for this collection: Three featuring Jame and the fourth one an original Sherlock Holmes tale, thrown in just for fun. Pat has also written brand new introductions for each story, so the reader gets a fuller picture of Jame's life. These stories explore different facets of Jame’s life and background and weave a lush and complex picture of this enigmatic figure.

In addition, Pat has sent us a folder of original artwork, some of it published in the original version of Blood and Ivory, much of it never before published. All of it will be included in a special "art gallery" section in Blood and Ivory: A Tapestry.

Pat Hodgell can’t remember a time when she wasn’t passionately interested in science fiction and fantasy. "David Star, Space Ranger by Paul French was the first novel with which I fell in love, so much so that I started making my own copy of the library book, long-hand in a spiral notebook, complete with a carefully drawn facsimile of the frontispiece. Long afterward, I came across a paperback reprint and learned that my beloved ‘Paul French’ was none other than the ubiquitous Issac Asimov."

Over the years, as her interest grew, Pat collected piles of paperback science fiction and fantasy novels and comic books. Soon, however, reading and collecting genre fiction wasn’t enough for her and, after college, she began to write it as well.

"It would be nice to say that, after the long suppression of the writing impulse, the dam burst—but it didn’t. Due to lack of practice, I simply didn’t know how to put a story down on paper." Pat began to learn, however, and by the next summer she had several stories finished and an invitation to the Clarion Writer’s Workshop. "There, for the first time, I found a whole community of people like me—storytellers, wordsmiths, an entire family I never knew I had," Pat says of the Clarion experience. "Even more wonderful, here suddenly were professionals like Harlan Ellison and Kate Wilhelm telling me that I could indeed write. I could hardly believe my luck." She made her first professional sale two years later. Since then, she’s sold stories to such anthologies as Berkley Showcase, Elsewhere III, Imaginary Lands, and the Last Dangerous Visions. Pat has also published three novels: God Stalk, Dark of the Moon, and Seeker’s Mask, all part of an on-going fantasy saga concerned not! only with high adventure, but also with questions of personal identity, religion, politics, honor, and arboreal drift.

Both of Pat’s parents are professional artists. Other reputed ancestors include a decapitated French Huguenot, a sheep thief tried by Chaucer, and a "parcel of New York Millerites who in 1843 sold their possessions, put on white nightgowns, and sat on the chicken coop waiting for the world to end. When it didn’t, they moved to Wisconsin out of sheer embarrassment."

Pat lives in Oshkosh, Wisconsin, in a nineteenth-century wood-framed house, which has been in her family for generations. In addition to writing and teaching, she attends science fiction conventions, collects yarn, knits, embroiders, and makes her own Christmas cards.

1. Blood And Ivory: A Tapestry

2. Blood And Ivory: A Tapestry

5. Blood And Ivory: A Tapestry