Items related to Behind the Wheel Chinese (Mandarin) 8 One Hour Audiocassette...

Behind the Wheel Chinese (Mandarin) 8 One Hour Audiocassette Tapes 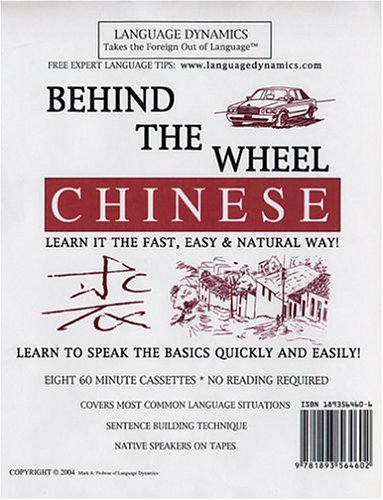 At last a Mandarin audiocassette course which requires no reading and which teaches you to actually speak Mandarin Chinese in a minimum of time and effort. Designed by the experts at Language Dynamics, 'Behind The Wheel Chinese For Your Car' takes the learner from basic to intermediate level Mandarin without the guesswork and pain usually associated with language learning. An expert English speaking instructor talks you through these tapes in English while 2 trained professional native Mandarin speakers teach you Chinese the way it is really spoken! Behind The Wheel Chinese For Your Car is the ideal way to learn Mandarin Chinese while you drive because there is no confusion, no reading, no looking up meanings, and no guessing. It's all on the tapes. Use your commute time to effectively learn Chinese with this delightful course whose method will have you speaking your first words in Mandarin within minutes of receiving your course, and enjoying it. The product has superb clarity of voices and exudes a spontaneity which makes learning Chinese fun. You'll be thrilled with the fast and easy to learn design of the course, beginning with the immediate gratification you feel when you conclude your first one half hour session with the tapes speaking sentences in Mandarin that Chinese speakers understand 10 minutes later on the street. You'll be amazed at the 'natural' way you just seem to pick up Chinese without having to learn grammar or reviewing. No need to go back. It's all 'built in' the course. Just imagine the thrill of being able to express what you really feel in Mandarin in 100 different ways because you know own a Chinese linguistic blueprint, a template that you can manipulate over and over again in different and personal ways while increasing your fluency in Mandarin. What' s more, you will also learn to speak in the past, present and future along with idioms all in the same course.

Mark Frobose is nationally published foreign language author, teacher, and speaker with over sixty foreign language titles currently in print. Mark is fluent in Spanish, French, Italian, and Portuguese and is the founder of Language Dynamics Inc. Mark, who is a popular foreign language expert, has recently appeared on Fox 5's 'Good Day New York' and on 'LA Insight' and countless other radio and TV programs. He has lived and studied throughout Latin America and Europe and holds numerous degrees and certificates from foreign and American universities. Mark has studied and/or taught languages at the Universidad Ibero-Americana in Mexico City, Universidad Cat--lica in Quito, Ecuador, L'Universite de Grenoble, France, Illinois State University, University of Illinois, and the University of New Mexico. Mark has received numerous awards and was rated as an excellent instructor by his students at the University of Illinois in Champaign-Urbana. Mark, who holds an MA from the University of Illinois where he was rated as an excellent instructor by his students, later went on to found Language Dynamics Inc. which now produces the nation's best in rapid, easy to learn foreign language courses and books. Mark has been invited to speak at a number of foreign language teacher conferences as a keynote speaker and has successfully written over 60 foreign language learning titles which are currently sold nationwide and abroad.

I learned more from Behind the Wheel Chinese for $69.00 than from two courses from Pimsleur for $400.00. -- Fred Ginocchio / Engineer

This course is so simple that I was speaking basic sentences in Chinese within a half hour. -- Tina Booth / Teacher