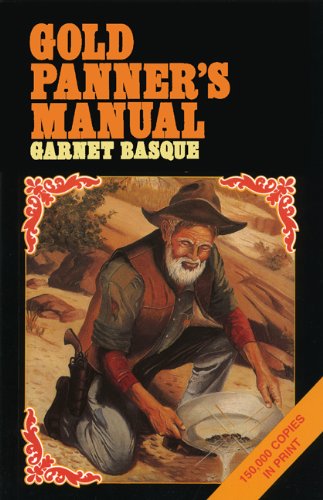 Gold! Of all the words in the English language, surely this must be the most magic of all. Garnet Basque has compiled a fascinating, factual and comprehensive history of gold, complete with details of how to search for and find nuggets and placer lodes—perhaps even the fabled motherlode. A concise, well-written guide that has sold more than 140,000 copies, this book is well illustrated with photographs and drawings demonstrating the art of panning and gold-mining equipment.

Today, with gold at high levels, new interest is being shown in historic riverbanks which, in 1897-98, drew tens of thousands from every walk of life and every corner of the globe. Today, for the first time in nearly a century, every square foot of Bonanza and Eldorado creeks, site of the most feverish activity during the Klondike excitement, has again been staked and is being worked, by weekend amateur and large syndicate alike. Yet others are doing their "mining" in the collection of coins, objects d'art, and bullion, in the belief that gold is the only sure hedge against worsening inflation.Whatever one's reason for becoming interested in gold - and who is not - author Garnet Basque has compiled a fascinating, factual and comprehensive history of gold, complete with details of how to search for - and how to find - nuggets and placer lodes; perhaps even the fabled "mother lode."There are chapters on such topics as: Gold Throughout the Ages, Some Facts About Gold, How to Locate Placer Gold, The ABC's of Gold Panning, How to Recover Fine Gold, Equipment, and much more. (5 1/2 X 8 1/4, 108 pages, b&w photos, maps, diagrams)

Garnet Basque wrote a host of books on western Canadian history and gold-rush lore, including Methods of Placer Mining, Lost Bonanzas of Western Canada, vols. 1 and 2, Ghost Towns and Mining Camps of the Boundary Country, and British Columbia Ghost Town Atlas. He was the publisher of Sunfire Publications and died in 1995.