Wealth By Stealth: Corporate Crime, Corporate Law, and the Perversion of Democracy 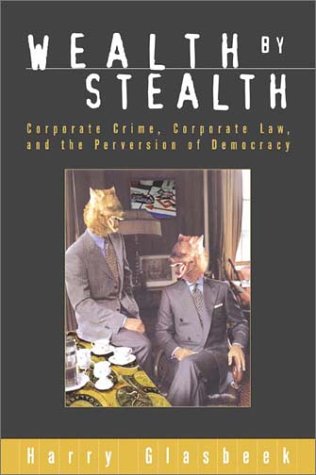 How is it that corporations are able to behave irresponsibly, criminally, and undemocratically?
Wealth by Stealth is a scathing introduction to the operations of the modern corporation, written by a corporate lawyer. Many writers point to the growth of undemocratic corporate power. Glasbeek takes these observations further and outlines clearly how corporations become so powerful. He also shows how they are able to act without regard to the behaviour and laws governing citizens and other groups.
Glasbeek is known by generations of students for his brilliant, funny lectures at Osgoode Hall Law School. With Wealth by Stealth his informative critique of corporate behaviour becomes available and accessible to all.
How is it "The corporation makes them do it"?

"Large investors have set up mechanisms to insure that managers have the same interests as they do, in profiteering of a certain kind. Consequently, managers take a short term interest, regardless of the impact that this might have on social and economic welfare both of the corporation and the society at large."
Harry Glasbeek

in conversation with Peter Steven, September 2002
PETER STEVEN: Who do you see as the audience for Wealth By Stealth?

HARRY GLASBEEK: My vision is to reach people who are affected on a daily basis by corporate activities but don't have the information to understand the law. I have deliberately written this book in a non-technical fashion, while still being accurate.

I argue that the legal architecture of the corporation itself is faulty. Although the law is not supposed to favour the rich over the poor, corporate law itself instils those inequalities. The law actually legitimates and sanctions this situation.

PS: You have written a number of books on the law. How is Wealth By Stealth different?

HG: This book straddles the fields of law and social science and although it respects the two areas it presents an overview. My other works have been much more technical. The main text is written in a generalized way for readers new to the subject. For those most interested, the notes and sources at the back allow you to pursue the more sophisticated aspects. The idea is to acquaint people with what's going on and to provide a critique. I provide many examples, often with outcomes that will startle. They startle because these corporate situations are not treated by the law in the way that we would expect them to be.

PS: When you talk about corporate crime most people will assume you are referring to those bad companies we've been hearing about, such as Enron, WorldCom, and Westray mining.

HG: My book covers criminal behaviour and situations long before the latest outbreaks of stock market and accountancy scandals. But more than that I seek to differentiate specific examples from the general operations of corporate law. The WebCom and Enron scandals became significant because the companies were cheating each other. This is what caught the media attention rather than the daily misdeeds of corporate actors. It was the legal structure itself that enabled them to act politically, and mould the world around them, in a profoundly anti-democratic manner. The book does speak to the Enron / Webcom-type scandals in as much as it explains why it is that the discretionary power of managers in large corporations is subject to abuse.

PS: Nevertheless, why are so many corporations acting badly right now?

HG: Enormous power has been given to directors and managers and there has been growing pressure on them to drive up their share prices. Power has been given to management teams to use the shareholder's money in ways that they see fit. Large investors have set up mechanisms to insure that managers have the same interests as they do, in profiteering of a certain kind. Consequently, managers take a short term interest, regardless of the impact that this might have on social and economic welfare both of the corporation and the society at large.

These scandals also come at a time when there is a clear economic problem: we have a massive amount of excess production on a world-wide scale, so many corporations are not performing as well as the value of their share prices might indicate.

PS: How can "ordinary" citizens possibly hope to wade into the complex and murky world of corporate law? Isn't it a field for specialists only?

HG: That's what a specialist would have you believe. I believe that the basic principles can be understood and that it doesn't take too much thought to see the contradictions. This may offend all those corporate lawyers who deal with the inside workings of the law, such as the Securities Commissions, the tax laws, the partnership agreements, etc. but these are internal questions that need not concern us.

It is vital to understand that corporate decisions can have enormous impact on our lives. Corporations make quasi-legal decisions that affect housing, development, and health, the kinds of products that are made, the kinds of safety measures that are taken. These decisions often have binding power. They a

1. Wealth By Stealth: Corporate Crime, Corporate Law, and the Perversion of Democracy

2. Wealth By Stealth: Corporate Crime, Corporate Law, and the Perversion of Democracy