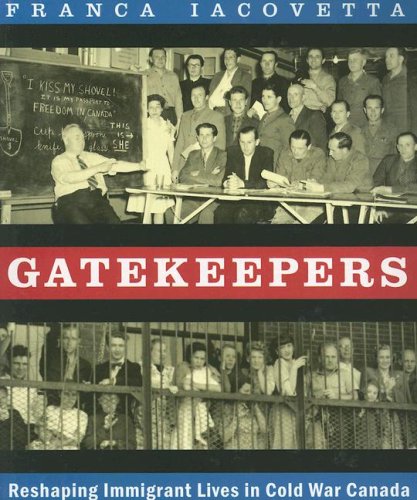 An in-depth study of European immigrants to Canada during the Cold War, Gatekeepers explores the interactions among these immigrants and the "gatekeepers"-mostly middle-class individuals and institutions whose definitions of citizenship significantly shaped the immigrant experience. Iacovetta's deft discussion examines how dominant bourgeois gender and Cold War ideologies of the day shaped attitudes towards new Canadians. She shows how the new comers themselves were significant actors who influenced Canadian culture and society, even as their own behaviour was being modified.

Generously illustrated, Gatekeepers explores a side of Cold War history that has been left largely untapped. It offers a long overdue Canadian perspective on one of the defining eras of the last century.

Franca Iacovetta is a professor of history at the University of Toronto. A feminist, labour, gender, and migration historian, she is the author of several books on Canadian social history.

'Contains a sizable compendium of primary and secondary sources, archival information, and film titles, clearly a boon to teachers and designers of curriculum units.'
- Canadian Literature

'The richness of this book lies in its analysis of rarely documented details of Canadian life during the Cold War, particularly among displaced persons from Eastern Europe. ... Gatekeepers is a valuable resource regarding the history of anti-communism in Canada, postwar ethnicity, the roots of state sanctioned multi-culturalism, and the effects of forced assimilation.'
- The Beaver

"Iacovetta's take on citizenship reflects a turn from what might be thought of as a celebratory mood of struggle and achievement in immigration studies toward a more edgy, critical view of the whole process of integration... Should give hope to those seeking change in contemporary society."- Literary Review of Canada

"Serves as a salutary and timeless lesson to us as we seek to realize the enormous economic, social, and cultural benefits of liberal immigration policies while addressing the real but limited risks to national security that such policies entail."
- American Historical Review

'An important addition to immigration history in North America ... adds significantly to our understanding of the postwar immigration story. This is a dynamic and innovative study of a period that has just begun to attract its rightful analysis.'
- Journal of American Ethnic History

Book Description Between the Lines. Paperback. Condition: GOOD. Spine creases, wear to binding and pages from reading. May contain limited notes, underlining or highlighting that does affect the text. Possible ex library copy, will have the markings and stickers associated from the library. Accessories such as CD, codes, toys, may not be included. Seller Inventory # 2979360740

Book Description Between the Lines, 2006. Condition: Good. A+ Customer service! Satisfaction Guaranteed! Book is in Used-Good condition. Pages and cover are clean and intact. Used items may not include supplementary materials such as CDs or access codes. May show signs of minor shelf wear and contain limited notes and highlighting. Seller Inventory # 1897071116-2-4

Book Description Between the Lines. Paperback. Condition: Very Good. A copy that has been read, but remains in excellent condition. Pages are intact and are not marred by notes or highlighting, but may contain a neat previous owner name. The spine remains undamaged. At ThriftBooks, our motto is: Read More, Spend Less. Seller Inventory # G1897071116I4N00

Book Description Between the Lines. Paperback. Condition: Very Good. A copy that has been read, but remains in excellent condition. Pages are intact and are not marred by notes or highlighting, but may contain a neat previous owner name. The spine remains undamaged. At ThriftBooks, our motto is: Read More, Spend Less. Seller Inventory # G1897071116I4N00

Book Description Between the Lines, 2006. Paperback. Condition: Good. Item may show signs of shelf wear. Pages may include limited notes and highlighting. May include supplemental or companion materials if applicable. Access codes may or may not work. Connecting readers since 1972. Customer service is our top priority. Seller Inventory # mon0001466878

Book Description Between the Lines, 2006. Condition: Good. Ships from the UK. Former Library book. Shows some signs of wear, and may have some markings on the inside. Seller Inventory # GRP117257251