Items related to Stubborn: Big Ed Caswell and the Line from the Valley...

Dick Bourgeois-Doyle Stubborn: Big Ed Caswell and the Line from the Valley to the Northland

Stubborn: Big Ed Caswell and the Line from the Valley to the Northland 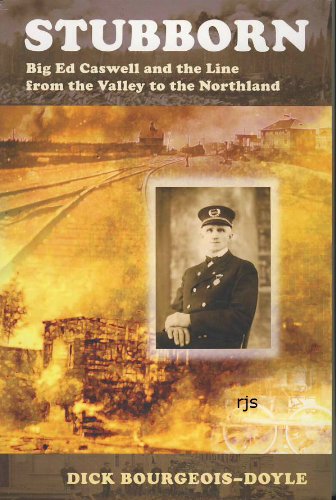 Stubborn celebrates the centennial of Cochrane, Ontario, and describes the determination, grit, and downright stubbornness of the scrappy pioneers who settled and populated Northern Ontario in the nineteenth century. One man in particular, Ed Caswell, personified this quality of stubbornness as he and his community battled one disaster after another. Cochrane, Ontario--the town known as the Northland Post--was ravaged by fire four times in the first six and a half years of its official existence. Two of these infernos were arms of the deadliest and most horrific forest fires in Canadian history, and both of them wiped the substance of the town off the map. Yet none of these disasters would be considered the most tragic time of Cochrane s early days. That marker would be placed on the year of the town s typhoid epidemic. Each event was trying in its own way, and each demanded its own reaction. But the common feature of every response was an unflinching and sometimes baffling determination to regroup and push on, often using scorched tools to rebuild, while the embers of desolation still smouldered. The act was a practical and caring kind of stubbornness that manifested in the common people who settled this region and came together to define the unique culture of this part of Canada. This book seeks to examine this mindset while paying tribute to these people and their fire chief, Edgar Big Ed Caswell, the man who became Cochrane s longest-surviving pioneer: the one who exemplified a fierce commitment to the town and to the opportunity it represented.

Dick Bourgeois-Doyle lives in Ottawa and is currently Director of Corporate Governance at the National Research Council of Canada (NRC). He has been involved in a number of special projects since joining the NRC Executive Offices in 1987. He previously served as Chief of Staff to the Minister of Science and Technology and the Minister of Fisheries and Oceans and was start-up manager of successful technology and public relations firms. A former broadcaster and journalist, Bourgeois-Doyle has contributed to many articles, TV features, and radio programs on science history and is the author of the biographies George J. Klein: the Great Inventor and Her Daughter, the Engineer: the Life of Elsie Gregory MacGill. He was also editor of Renaissance II: Canadian Creativity and Innovation in the New Millennium.

1. Stubborn: Big Ed Caswell and the Line from the Valley to the Northland Bourgeois-Doyle, Richard I.

2. Stubborn: Big Ed Caswell and the Line from the Valley to the Northland Bourgeois-Doyle, Richard I.