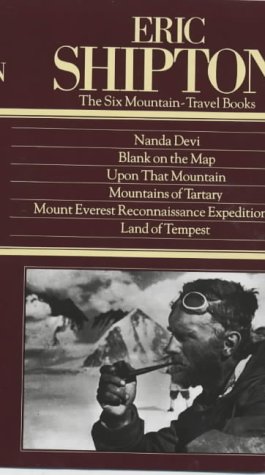 This is the account of one of the finest high altitude climbs yet achieved, the climbers, at the peak of their powers, climbed a major Himalayan face. On their return Scott and MacIntyre wrote this historic text.'

The explorer's explorer, ERIC SHIPTON'S enormous accomplishments make him one of the greatest adventurers of the twentieth century. His pioneering treks and climbs in unmapped mountain ranges laid the groundwork for the first ascent of Everest and other Himalayan peaks, and as a global traveler, he was tapped for Britain's diplomatic core during World War II. Eric Shipton's adventures in the mountains are virtually incomparable. He explored Central Asia, Africa, and South America, making a number of significant first ascents of his own as well as pioneering routes for the first ascents of others.

Shipping: US$ 6.13
From United Kingdom to U.S.A.
Destination, rates & speeds

Shipping: US$ 24.57
From United Kingdom to U.S.A.
Destination, rates & speeds