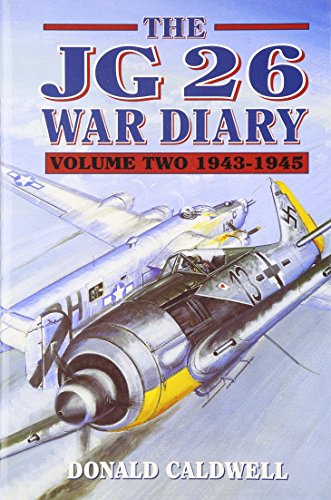 This is volume two of a comprehensive history of the German World War II Jagdgeschwader 26 (JG26) unit. Volume two takes the JG26 from the beginning of 1943, when the American 8th Air Force first began to make its presence felt over occupied Europe, until the end of the war.

During this period the Luftwaffe, with its JG26, began an inexorable decline, though the men of the JG26 unit continued to score successes over Normandy, Arnhem and the Ardennes. This book contains interviews with these men and provides a daily account of the wing's activities, using Allied records, radio intelligence, and post-war research, as only two of the 30 volumes of the unit's official diary survived the war.

The book is based largely on primary documentation obtained from the unit's veterans and on material from the national archives of Germany and the UK and USAF Historical Research Agency. The volume provides information such as JG26 casualties, Allied victories, JG26 aerial victories and Allied victims.

Donald Caldwell is a retired research chemist. For the past 25 years he has researched archival sources and interviewed veterans, primarily from the Luftwaffe. His first book, JG 26: Top Guns of the Luftwaffe, has been followed by four others on the Luftw