Items related to Current Developments in English for Academic and Specific... 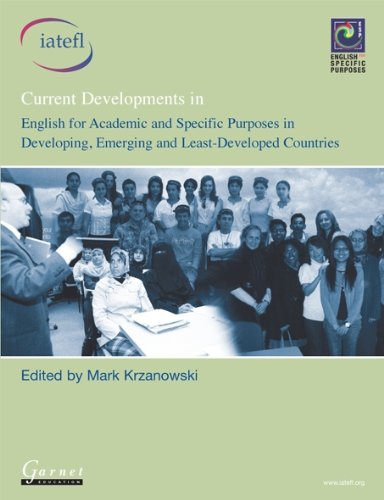 Mark Krzanowski holds an MA in Applied Linguistics, the RSA/UCLES Dip TEFLA, a PG DMS, and is a Fellow of HEA (the Higher Education Academy). Mark has been involved in English Language Teaching since 1990. He is based in London, and his current academic affiliations include: the London School of Hygiene and Tropical Medicine (LSHTM), the University of London, where he lectures in English for Academic and Specific Purposes to international postgraduate students; the Language Centre, University of Arts London, where he is the Course Leader for Insessional EAP Courses; and the Department of English and Linguistics at the University of Westminster, where he lectures in TESOL and TEFL to BA and MA students. He also acts as External Assessor in ELT for Cape Peninsula University of Technology, Cape Town, South Africa. Since 2003, Mark has been the Co-ordinator of the IATEFL's (International Association of Teachers of English as a Foreign Language) ESP (English for Specific Purposes) SIG (Special Interest Group). In addition, he is also involved in academic consultancies abroad: in the last four years, he has worked on various EAP and ESP projects in Central Asia (Kyrgyzstan and Tajikistan), India, Pakistan, South Africa, China, Palestine, Oman, Bahrain and Yemen. In the past, Mark was Academic Co-ordinator for ELT in the Dept of PACE at Goldsmiths College, University of London (2002-2005); Head of ELT Unit and Senior Lecturer in EAP at the University of Hertfordshire (1997-1999-2002); and EAP Co-ordinator at UCL/University College London (1993-1997). Mark is actively involved in scholarly activity. In April 2008, he was plenary speaker at the Sultan Qaboos University ELT Conference (Muscat, Oman), and in July 2008, he was the plenary speaker at the English for Work Symposium in Johannesburg, South Africa, organized at Wits University by the British Council and SAATEIL. He is also the editor of Current Developments in English for Academic, Specific and Occupational Purposes (Publisher: Garnet Education, March 2008) and Current Developments in English for Academic and Specific Purposes in Developing, Emerging and Least-Developed Countries. Mark's professional interests include: materials design in EAP and ESP; teacher training; trainer training; academic listening; applied linguistics; academic management; learning and teaching; and teaching and teacher training via videoconferencing.