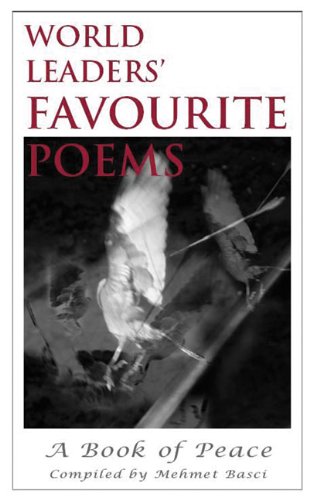 Mehmet Basci is a Kurdish writer who lives in Switzerland. Micheline Calmy-Rey is the former president of Switzerland.

Diary NotesSo what about the cultural tastes of the politicians who make immigration policy? Welsh publisher Parthian has just announced World Leaders' Favourite Poems compiled by Mehmet Basci, A Turkish Kurd now living in Switzerland who spent five years tracking down the poetic choices of national leaders with the admirably idealistic aim of reflecting "on our common hopes, fears and pleasures". Of course, some in office when he began, such as Tony Blair (Rupert Brooke's "The Soldier"), are no longer so. But Gordon Brown demonstrates the awesome scope of executive power in his choice of a poem by the American James Stockinger, which he often quotes in speeches: "The hands of other people lift us from the womb. / The hands of other people grow the food we eat, / weave the clothes we wear and / build the shelters we inhabit." When told of Brown's choice, Stockinger was flattered, but he also felt duty-bound to explain that the - slightly misquoted - lines were actually from his doctoral thesis and not a poem at all. But if the prime minister says it's a poem ... Stockinger authorized a few judicious carriage returns and what was prose is now officially verse in the new anthology.Nick Wroe, Guardian Review Saturday 15 March 2008

Book Description Hardback. Condition: New. Language: English. Brand new Book. This collection of international poetry features world famous names; Jorge Luis Borges, Rudyard Kipling, Rainer Maria Rilke, William Wordsworth, Kahil Gibran and Par Lagerkvist: The poems have all been chosen by national leaders, prime-ministers and presidents, including Tony Blair, Ariel Sharon and Gerhard Schroder. There are also personal contributions from some of these influential world leaders themselves such as AJP Abdul Kalam and Ludwig Scotty. The book is subtitled "A Book of Peace" and is based on an original idea by Mehmet Basci, a Turkish Kurd who now lives in Switzerland who wanted to unite, through the love of poetry, some of the worlds most powerful leaders in a dream of peace. The foreword is written by Swiss president, Micheline Calmy-Rey. Seller Inventory # AAO9781902638980

Shipping: US$ 12.58
From United Kingdom to U.S.A.
Destination, rates & speeds

Shipping: US$ 12.52
From United Kingdom to U.S.A.
Destination, rates & speeds

Shipping: US$ 18.88
From United Kingdom to U.S.A.
Destination, rates & speeds