Items related to Princes of Darkness: The Lives of Luftwaffe Night Fighter... 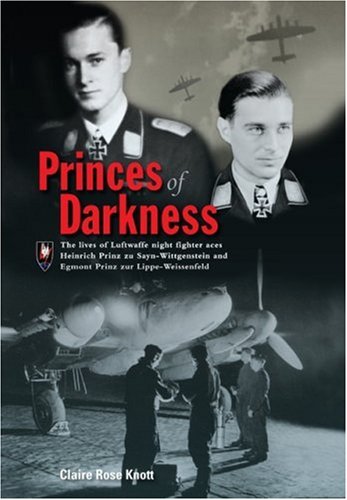 Princes of Darkness is a unique illustrated account of the careers of Heinrich Prince zu Sayn-Wittgenstein and Egmont Prince zur Lippe-Weissenfeld - two aristocrats who served with the Luftwaffe's night fighter force and whose lives were often interconnected.

The book is the result of many years research on the part of its author, Claire Rose Knott, who has been granted unprecedented access to never before published diary notes, personal correspondence, logbooks, and family photographs. The work also benefits from research in archival resources, technical data and recollections supplied by the Princes' night fighter contemporaries. The text contains firsthand accounts by family, friends and fellow officers who offer unique accounts of the ambition, intensity and actions of the leading characters in time of war. Over the years, the Princes have courted controversy with several conspiracy theories regarding their deaths. The plausibility of such theories when viewed against their aristocratic family backgrounds and placed against the backdrop of intense social upheaval under the Nazi regime, are investigated here.Prince Heinrich Zu Sayn-Wittgenstein was the third highest scoring night fighter ace in the Luftwaffe who served from mid-1941 until his death in 1944. He was killed when his aircraft was hit by return fire from a bomber or by an RAF nightfighter. Zu Sayn-Wittgenstein baled out but was killed by the impact of landing. His victory score at that time of his death was 83 - 29 in the East and 54 in the West.Prince Egmont zur Lippe-Weissenfeld, an Austrian, started his career as a daylight fighter pilot, and became a nightfighter when serving under the famous Helmut Lent as Staffelkapitan. He is accredited with 51 aerial victories while flying - mainly the Messerschmitt Bf 110 - and is ranked 21st among the German night fighter aces. He was killed on 3 March 1944 when his Bf 110 clipped the ground and crashed during a flight over the Ardennes. The text is supported by rare and fascinating photographs of the pilots' aircraft, weaponry (including the upward-firing 'Jazz Music' twin cannon) and radar equipment as well as others in their squadrons, together with commissioned color artwork of Messerschmitt Bf 110 and Junkers Ju 88 night fighters.